With OpenPower, IBM tries to turn the tables on Intel 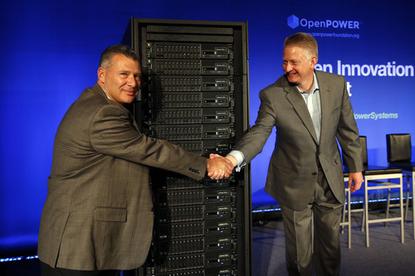 An IBM project to widen the use of its Power server chips has inched forward with Big Blue trying to challenge Intel for a bigger role in the hyperscale data centers run by the likes of Google and Facebook.

It's a turnaround from the past decade, in which Intel's increasingly powerful Xeon chips have been eating away at IBM's Power business. Now, with a new strategy to license its Power design for use by other server makers, IBM is fighting back.

Power processors are used today in IBM Unix servers that run back-end software from companies like IBM, SAP and Oracle. That traditional Unix market has been in decline, so IBM also wants to position Power for Web and analytics applications in large, scale-out data centers.

IBM will continue to build Power servers as before, and it launched new systems Wednesday based on its new Power 8 chip. But it's enlisting other firms to help it win more business from large-scale online service providers in the U.S. and China.

Those companies buy a lot of hardware, but they increasingly want a say in how it's designed, and they want low-cost, no-frills "white box" systems. That's a different business model from IBM's, which is why it formed the OpenPower Foundation, an alliance mostly of vendors that now has 26 members.

Several of those members announced advances around Power on Wednesday. Nvidia said its GPUs will be able to act as accelerators in Power servers for the first time. Tyan, a motherboard maker, showed the first reference design for a white-box Power server. Component vendors Mellanox, Xilinx and Altera also disclosed advances around Power chips. Other members include Hitachi and Samsung.

Google is part of the effort, too, and worked with IBM and Canonical to develop open-source tools and firmware for Power systems. If IBM can secure Google as a customer, it would be a big vote of confidence, but right now Google is evaluating the hardware.

"We're going through a pretty detailed investigation of the Power architecture for the different types of workloads we see," Gordon MacKean, a Google engineering director, said at the OpenPower event Wednesday. He's also chairman of the OpenPower Foundation.

Google is attracted to the open, multivendor approach IBM is taking, MacKean said. "Google recognizes the amplifying effect of an open community," he said.

That openness is key, and it's not something IBM is doing by choice. Its own Power servers come bundled with costly software and services that aren't suited to the low-cost model of companies like Facebook and Google.

"Scale-out service providers aren't going to buy from IBM," said Patrick Moorhead, an analyst with Moor Insights & Strategy. "No matter how good the technology is, they'll want to buy it from someone with a different cost model."

That's why it's important for IBM to secure licensees for its Power chip. China's Suzhou PowerCore will be the first licensee, and it will help IBM tap into the big China market. But IBM will need more partners, including system builders to make Power servers.

"They're definitely still in the crawl stage," Moorhead said.

Still, he likes the heterogeneous approach IBM is taking, allowing GPUs and other components to work with Power chips as first-class citizens. It's achieving this partly through a new interface technology called CAPI, which allows GPUs and FPGAs to link directly to the Power processor's memory.

IBM is mimicking the business model used by ARM, which has been successful designing processors for smartphones and tablets and licensing them to other companies for manufacture.

ARM is also gunning for the server market, but it's attacking it from the low end by offering power-efficient cores that aren't very powerful. There's been a lot of buzz around these "wimpy" cores, and IBM's OpenPower effort in some ways validates Intel's strategy by showing there is demand for "brawny" cores, too.

The bigger processors offer a much larger working memory space, which is useful for quickly analyzing large amounts of data. They also offer more compute threads per core and faster I/O bandwidth. For some workloads, bigger cores will be more cost-effective, Moorhead said.

Intel provides something like 90 percent of the CPUs in servers today, and its chips provide the backbone for hyperscale data centers. The company's not standing still, either. Its recently launched E7 v.2 processors triple the memory capacity of their predecessors, precisely one of the features companies like Google want.

IBM is determined that Power will have a bigger role to play, but it's aware there's a lot of development work to be done.

"Power is well-known for computers with doors on them," said Brad McCredie, IBM vice president of Power development, referring to the big cabinets that house its Power servers today. "You don't think of them as scale-out computers."

"We're taking that technology used to build computers with doors, we're decomposing it into its elements, and we're making it available to people to innovate," he said.

IBM is only giving up so much control of its server platform, however. While other companies can license its Power architecture, they won't be able to offer its AIX operating system; they'll have to use Linux.