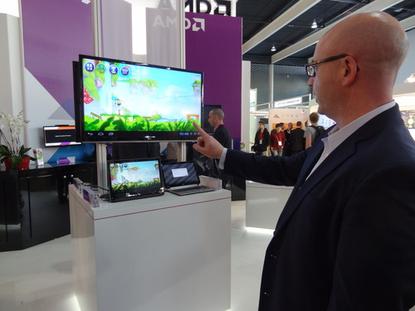 Working with BlueStacks, AMD has optimized a version of Android to run on its processors. At Mobile World Congress AMD added additional software to perform gesture tracking using a standard webcam, allowing the company's director of mobility solutions, Kevin Lensing, to play Angry Birds on a Windows tablet under Android, without touching the screen.

Advanced Micro Devices has optimized a version of Android for tablets and PCs containing its chips, and will sell it on new PCs through retail stores in Europe.

AMD doesn't intend that Android will replace Windows on those devices, nor will it offer a dual-boot option. Rather, it will sell a version of the Google-backed OS packaged as a Windows executable by BlueStacks, a software company in which AMD Ventures owns a stake.

BlueStacks' version of Android runs from within Windows, allowing it access to PC hardware including cameras, accelerometers or gyroscopes, and to the Windows file system.

"It's a virtualized Android experience as a Windows app. The two worlds can talk to each other," said AMD's senior director for mobility solutions, Kevin Lensing, showing off the software on the company's stand at Mobile World Congress.

The software forms part of another demo in which AMD uses the front-facing camera on a tablet as a gesture-based controller. The demo software draws on the graphics processor to track the user's index finger and move the cursor accordingly. Bending the finger generates a click. In this way, Lensing was able to play the Android version of "Angry Birds" on a Windows tablet without touching the screen and without the need for additional controller hardware.

The BlueStacks dual-OS Android system will go on sale in the second half of this year, initially through European retailers. AMD said the first will be Elkjop Group, which operates in Scandinavia and Eastern Europe. It will be sold with desktops machines, notebooks, tablets and hybrid devices containing AMD processors.

Under the BlueStacks software, applications can be downloaded from a number of app stores, and run either within a Windows window, or full screen, AMD said.