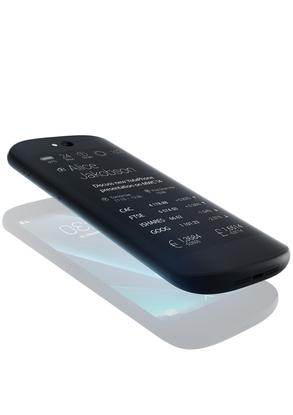 Yota Devices will launch a new version of its innovative dual-screen smartphone by the end of this year, it said Monday at the Mobile World Congress expo in Barcelona.

The YotaPhone looks like a conventional smartphone from the front, but flip it over and there's a large e-paper screen on the reverse side. Because e-paper displays retain their image and only require power when new information is drawn on the screen, the YotaPhone's second display remains on continuously without impacting battery life.

The 4.7-inch e-paper screen has also been upgraded with a higher resolution, finer pixel density and a light.

Yota Devices claims a battery life of around 50 hours when using the e-paper screen. The display is suitable for text-based applications but is monochrome only. The 5-inch full-color AMOLED screen on the front of the phone will be the best choice for interactive apps and multimedia, albeit at the expense of battery life.

To help conserve power, the phone will have a "smart power mode" that turns off certain components when they are not needed.

The new YotaPhone will be available in Europe, the Middle East and Africa in the final quarter of this year. It will go on sale in North America and Asia around three to four months later, the company said.

No price was announced for the handset. Users of first-generation phones, which cost €499, (US$685), will be given the option to upgrade "at a significant discount."