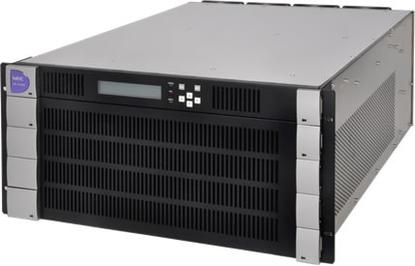 The 4K/60P VC-8150 encoder from NEC and NTT is an HEVC real-time video compression unit.

Commercialization of the technology is a world first, the telecommunications and electronics titans said.

A real-time encoding unit using the technology, the VC-8150, went on sale Wednesday in Japan, with shipping to begin in April.

The unit complies with the latest international standards on HEVC, a compression format for video that is the successor to the popular AVC (Advanced Video Coding), also known as MPEG-4 part 10.

The companies said the development was based in part on an analysis of an HEVC algorithm.

"Previously, 1.5 GB of terrestrial digital broadcast data could be compressed to 15 MB, but with this newly developed technology, 12 GB can be compressed to 30 MB," an NEC spokesman said. "We realized a four-fold improvement in the compression rate."

"With this technology, stations can begin 4K broadcasts," the spokesman said, adding the unit would be priced in the range of tens of millions of yen (hundreds of thousands of US dollars).

The manufacturers said the technology will contribute to the spread of video and broadcasting in 4K, a type of ultra high definition (UHD) with a minimum resolution of 2160p. 4K images have nearly 8.3 million pixels, four times as many as a 1080p image, which is the full HD resolution produced by Blu-rays.

While 4K has yet to make significant inroads into mainstream broadcasting, it has featured in Olympics coverage and other sports broadcasts.

Last October, Oregon-based Elemental Technologies and Japanese telecommunications carrier K-Opticom carried out real-time streaming of the Osaka Marathon with a 4K HEVC transmission. It was billed as the first such transmission of its kind.