The HTC One Max has an excellent display and stellar battery life but is let down by its fit and finish, and an awkward fingerprint scanner 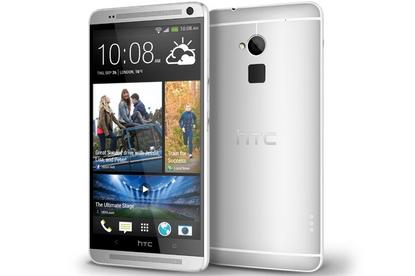 The HTC One Max has an excellent display and stellar battery life but is let down by its fit and finish, and an awkward fingerprint scanner.

The One Max is essentially a larger version of the One Mini. The Mini has a less premium finish than the original One and that carries over to the One Max.

The sides are finished in a glossy, white plastic rather than classier looking bevelled edge aluminium.

The One Max has a removable back panel that reveals a microSD card slot. The battery isn't removable but the inclusion of expandable memory is welcomed.

The sliding latch on the right side makes it easy to remove the cover, but there's a clearly visible gap between the cover and the sides of the handset.

The One Max is taller, wider and thicker than the Samsung Galaxy Note 3. The end result is a phone that's simply awkward to hold regardless whether you use one hand or two.

A fingerprint scanner on the One Max is notable, but it's extremely awkward to use due. Sitting just below the camera lens, you'll find yourself smudging the lens every time you swipe your fingerprint.

Further, the sensor is very inaccurate and works one in every three times, and you need to unlock the phone before using it.

Two excellent aspects of the original HTC One remain unchanged on the HTC One Max. The dual-stereo speakers that sit above and below the display (called 'BoomSound') are the best speakers we've heard on a smartphone.

The 5.9in, super LCD screen is also one of the best on the market, displaying bright, vibrant colours, exceptional viewing angles and deep blacks.

The HTC One Max runs the latest 4.3 Jelly Bean version of Android but is again skinned with HTC's Sense UI, now up to version 5.5.

The ability to remove the BlinkFeed home screen is a much welcomed addition. There's nothing that really compels us to use it instead of existing third-party apps like Flipboard.

An upgraded gallery with new video animations, and more themes and sound options for HTC's Zoe media are other new additions. Otherwise, the user experience on the One Max is almost the same as the One and the One Mini.

The One Max could still use some improvement when it comes to ease of use, particularly for those who haven't used an Android device before.

The One Max is a pretty fast and slick smartphone. We didn't encounter or experience any lag when performing basic tasks and the phone has no trouble playing even the most graphically intense games.

Performance comes despite HTC using a 1.7GHz Qualcomm Snapdragon 600 processor, slightly slower than the 2.2GHz Snapdragon 800 found in some of its competitors.

The phone has 2GB of RAM and comes with either 16GB of internal memory. HTC offers One Max users 50GB of additional free Google Drive online storage.

The HTC One Max has an identical rear camera to the larger HTC One, sans optical image stabilisation (OIS). The 4-megapixel 'UltraPixel' camera uses a custom image sensor with enlarged pixels.

Very good low-light performance is a highlight compared to most other smartphone cameras, but photos captured with the One Max do suffer from plenty of image noise.

The ability to record media called "Zoe" remains on the One Max. The Zoe mode captures one second of video before you take the photo and three seconds after.

It's useful for capturing an action shot which you may normally miss and the editing options are plentiful.

The front-facing camera on the One Max is identical to the original one, utilising a 2-megapixel lens with an ultra wide angle. Full HD video recording shot with the rear camera remains of a very good quality.

The HTC One Max has excellent battery life considering its large screen. The 3300mAh battery lasted around 16 hours on average before needing to be charged.