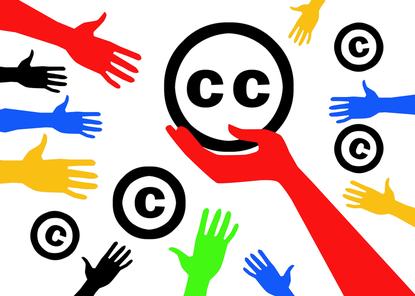 Creative Commons licenses allow copyright holders to easily grant permission to use their works in certain manners. Version 4.0 of the licenses were introduced Tuesday after a two-year development period in which legal experts around the world collaborated to renew and refine the license, the organization announced in a blog post.

While most of the dozens of improvements will go unnoticed by Creative Commons licensors and licensees, the new licenses are more user-friendly and more internationally robust than ever before, the organization said.

Creative Commons offers six standard licenses with which authors, artists, scientists, teachers and other creatives can manage their copyrights flexibly. With the standard licenses the users decide to what extent their work is allowed to be spread and edited, and under which conditions. The user does not entirely give up the copyright but rather grants certain user rights in advance so third parties do not explicitly need to ask for permission for using or adapting the work.

Version 3.0 of the license allowed a licensor to request a licensee to remove attribution from an adaptation of the work. That provision is expanded in the new license and now applies not just to adaptations but also to reproductions.

This means that licensors can choose when they want attribution for their work, said Kalshoven. The licenses now account for situations where licensors wish to disassociate themselves from uses of their works they object to, even if their work hasn't been modified or published in a collection with other works.

Another important change is the introduction of a 30-day window in which license violations can be corrected, Kalshoven said. All Creative Commons licenses are terminated when a licensee breaks the terms, but under the new licenses, licensees' rights are reinstated automatically if they correct a breach within 30 days of discovering it. This assures accidental violators they can keep using the work without having to worry they might lose the rights to do so permanently.

Granting a violator of the terms some leeway already happened in practice, for instance when somebodies name was spelled wrong in the attribution, said Kalshoven.

Another change that might be welcomed by users is that the text of the licenses has become much more readable, Kalshoven said. "In the new version the license text is completely restructured and rewritten in such a way that it is readable for people who are not lawyers," said Kalshoven.

The license also has become more global. This means that the licenses can be used around the world without the need to having to translate and adapt them to local laws. Creative Commons also introduced official translations of the licenses, so that users of CC-licensed material around the world can read and understand the complete licenses in their local languages, Creative Commons said.

Older licenses will remain valid and users who don't like the new 4.0 licenses can choose to use an older one, said Kalshoven. However, works licensed under an old license do not automatically update to the new license, and anyone who wants to license an already CC-licensed work under the new 4.0 license needs to relicense it, she added.