Suitcase-size device may help save lifes of disaster victims 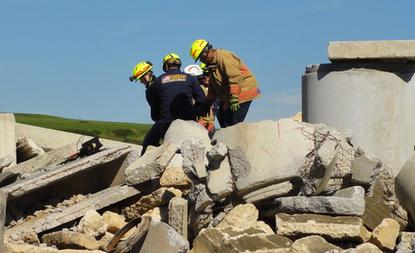 Rescue workers with the Fairfax County (Virginia) Fire and Rescue Department pull a buried "victim" out of rubble after using a new technology called FINDER developed by NASA and the U.S. Department of Homeland Security.

The device looks like a small piece of carry-on luggage, but it has a more important job than carrying a toothbrush, deodorant and a couple of pairs of underwear.

The suitcase-size device is a microwave transmitter designed by two U.S. government agencies to help rescue workers find living victims buried in rubble after disasters such as earthquakes, floods or bombings.

The groundbreaking technology, called FINDER or Finding Individuals for Disaster and Emergency Response, uses microwave signals to identify the breathing patterns and heart beats of disaster victims buried in rubble, has the potential to be one of the "biggest advances in urban search and rescue in the last 30 years," said John Price, program manager of the First Responders Group at the U.S. Department of Homeland Security's Science and Technology Directorate.

The suitcase device sends a low-power microwave signal into rubble to look for heart beats and breathing patterns, and rescue workers see readouts on a tablet-size Panasonic Toughbook controller. The reflections of the microwave signal can show tiny movements in rubble piles, said Jim Lux, FINDER tax manager at the Communications Tracking and Radar Division at NASA's Jet Propulsion Laboratory.

The technology is based on NASA tools to measure movements of objects in space and ocean levels, Lux said.

FINDER can find living victims buried under 30 feet of crushed materials or behind 20 feet of solid concrete, and the device can distinguish between humans and animals, based on heart rates and breathing patterns, officials said.

DHS and NSA have been developing FINDER for more than a year, and this week, they tested a prototype at an urban search and rescue training site in Lorton, Virginia, near Washington, D.C. Rescue workers from search-and-rescue team Virginia Task Force 1 and the Fairfax County, Virginia, Fire and Rescue Department were able to find a woman hidden in a pile of concrete rubble within minutes.

In previous tests of prototypes at the Lorton training center, rescue workers gave NASA and DHS some "painful" but necessary feedback, Lux said.

NASA and DHS plan to make FINDER available to search and rescue teams worldwide when it's fully tested, Lux said. The agencies are already getting suggestions from the public on other ways that the technology can be used, with a 9-year-old from India emailing Lux some suggestions recently, he said.