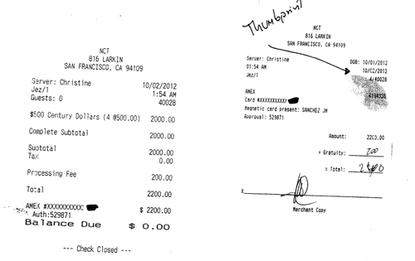 One of the receipts included in a lawsuit filed by a San Francisco strip club against Oracle and one of its employees over an unpaid tab shows a $2,200 charge.

A San Francisco strip club has filed a lawsuit against Oracle, alleging an employee of the software giant didn't pay a US$33,540 bill run up over two days last year.

The New Century Theater filed suit on Sept. 3 in San Francisco County Superior Court. Oracle has 30 days to respond from the day it is served legal papers.

"Mr. Sanchez signed for each of these charges in which the cardholder was in fact Oracle," the suit alleged.

Oracle, which is hosting its annual OpenWorld conference in San Francisco this week, declined to comment.

The New Century Theater, which is owned by the Nevada limited liability company Bijou-Century LLC, is on 816 Larkin Street in San Francisco. Oracle held its previous OpenWorld conference at the Moscone Center from Sept. 30 to Oct. 4, 2012.

Strip clubs in San Francisco often try to drum up business by courting attendees of big conventions, standing outside conferences and handing out coupons for free entry and drinks.

The lawsuit's "Exhibit B" includes photocopies of the charge receipts, which have a thumbprint. The receipts show purchases of "Century Dollars," which can be used for "club dances performed by entertainers," according to the club. New Century Theater guests are required to show a valid photo ID that matches their credit card before purchasing the credits.

Sanchez is alleged to have used his driver's license in order to use the American Express card, the lawsuit says.

Exhibit B also includes notification from American Express to the New Century Theater showing that the charges were contested. The club was hit with several chargebacks, the term for when a merchant is denied payment due to a dispute by a customer.

David J. Cook, attorney for the New Century Theater, said late Tuesday he could not comment on the lawsuit. The suit seeks $33,540 plus interest.