iPhone 5s gold rush begins, as crowds line up in US for new phone (+10 photos)

"Everyone is just crazy for the iPhone" 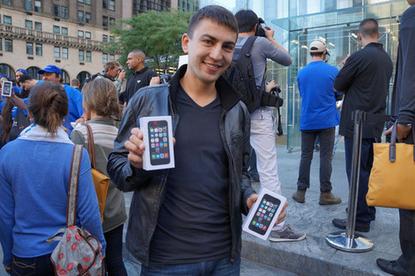 Apple’s latest phones—the iPhone 5c and iPhone 5s—hit retail shelves on Friday. And at Apple Stores in 10 countries around the world, people lined up in anticipation of doors opening at 8 a.m. local time so they could get their hands on the new models, just as they had for previous iPhone launches.

There's nothing like an iPhone launch to bring out a crowd.

Apple's latest phones--the iPhone 5c and iPhone 5s--hit retail shelves on Friday. And at Apple Stores in 10 countries around the world, people lined up in anticipation of doors opening at 8 a.m. local time so they could get their hands on the new models, just as they had for previous iPhone launches.

"Everyone is just crazy for the iPhone," said Artur Mardanov, who waited in line for 20 hours only to emerge from Apple's flagship Fifth Avenue store in New York with two iPhone 5s models.

iPhone fans had extra incentive to queue up this time around. Apple only began taking online orders for the iPhone 5s on Friday morning, so if you wanted one right away, you had to head out to a retail outlet selling the new phone. Besides Apple, the iPhone 5s went on sale from carriers AT&T, Sprint, T-Mobile, and Verizon, as well as retailers Best Buy, Wal-Mart, Target and RadioShack.

Software engineer Jose Marinez got up bright and early Friday morning to order his iPhone 5s online. But when he found out that his order wasn't expected to ship until October, he headed out to the Fifth Avenue store to stand in line. He had come prepared, though, with a comfortable chair.

The iPhone 5s appeared to be the main draw for crowds at Apple Stores on Friday--after all, you could preorder the iPhone 5c a week ago. But people lining up for the 5s still had color on their minds; specifically, the gold-colored version of the new smartphone looked to be a popular choice among would-be shoppers. At the Apple Store on Walnut Street in Philadelphia, for example, store employees announced 38 minutes before the iPhone launch that all the tickets for 16GB gold phones had been given away to people in line. That news was greeted by audible grumbling from the rest of the crowd. Similarly, at the Apple Store in Palo Alto, Calif., gold iPhones ran out of stock after about 30 customers, while the Cambridgeside Galleria Apple Store in, Cambridge, Mass., ran out of old iPhones about 35 minutes into sales.

"They ran out of the gold ones pretty early," said Iryna Hrubiy, a Drexel University student who wound up buying a space gray iPhone 5s at Apple's Philadelphia store. "But I'm starting to like this classy color combo I've got with the beige case and the black background, so I might keep it."

L Plaga, a rapper who wound up first in line at the Philadelphia store, was luckier with his color choice. "I want gold, gold is real good," he said. "It's a beautiful thing."

Why the focus on color? "People want to change their colors," said Ahmad Mohammad, a student upgrade from his iPhone 5 in Philadelphia. "The [iPhone] 4 and the 5 were white and black, so they just want something new."

But there's more to the iPhone 5s than just a new touch of color. Apple's latest phone boasts a speedier processor, camera improvements, and a new security feature called Touch ID. The capacitance-based scanner is built into the iPhone 5s Home button and uses your fingerprint to grant access to your phone.

Touch ID certainly caught the eye of Marinez, the software engineer waiting to get his iPhone 5s in New York. I have a lot of sensitive documents, and if I lost my phone, I'd be in big trouble," he said.

In Philadelphia, Hrubiy also was looking forward to taking advantage of Touch ID. "I always know people are going to go for my phone, so I have the code put in there, but it takes forever to do that constantly," she said.

Andrew Booth, in Philadelphia for business and taking advantage of his proximity to an Apple Store to buy an iPhone 5s for his wife, thought Touch ID might have uses beyond its initial features. "I think it will be used for other applications eventually, particularly for PayPal," he said.

Customers looking to grab an iPhone 5s on launch day had plenty of company. In Philadelphia, the line began forming at 11 a.m. on Thursday; by Friday morning it stretched all the way down the block--a longer line than greeted last year's iPhone 5 launch at the same store. At New York's Fifth Avenue store, the line for an iPhone had stretched around three blocks by the time the store opened its doors.

That scene repeated itself around the globe. A huge crowd--with some estimates as high as 1500 people--massed outside of the Regent Street Apple Store, with the line stretching down Hannover Street into Hannover Square Gardens. Back on this side of the Atlantic, the crowd wasn't as large at the Cambridgeside Galleria outside Boston, but a healthy line of around 200 people formed in anticipation of the iPhone's arrival.

Not every line was free of incident. According to media reports out of Houston, iPhone shoppers camping out in front of an AT&T Store were robbed at gunpoint.

In addition to the US and UK, the iPhone 5s and 5c went on sale in Australia, Canada, China, France, Germany, Hong Kong, Japan, Puerto Rico, and Singapore on Friday.