Unhappy with iOS 7? Downgrade while you still can

Apple is still signing the most recent versions of iOS 6, but it may not do so for long. 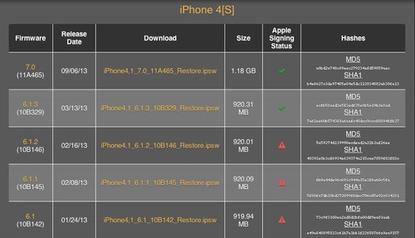 When you install a new iOS version, during installation the device connects to Apple’s servers to ensure that the version you’re installing is approved (or “signed” by the company”).

Despite the many warnings that iOS 7 was going to have a radically new look and it was worth it for some people to take a slow approach to upgrading, many people ventured blindly forth and were unhappy with the results. While raging at the dying of the light is one approach, there remains another--downgrade to iOS 6.

But do it quickly.

When you install a new iOS version, during installation the device connects to Apple's servers to ensure that the version you're installing is approved (or "signed" by the company"). If it has been signed, full speed ahead. However, when Apple issues a new version, it quickly stops signing the old ones. While you may be able to download a copy of an old version, if it fails the signing test, the installation will likewise fail.

It happens that Apple is still signing the most recent versions of iOS 6, but it may not do so for long. Therefore, if you feel that you've made a fatal mistake by upgrading to iOS 7, now's the time to fire up your Mac to grab iOS 6 and perform the downgrade.

If you can't find a copy of the old OS on your Mac, try the JustaPenguin site where you'll find links to various versions of the iOS. Those that have a green check next to them are still signed by Apple. Click on the appropriate link to download the version appropriate for your device. (In the case of an iPhone be sure to choose the right carrier version--GSM or CDMA.)

While you're waiting for the software to download, turn to your device, tap Settings > iCloud > Find my [nameofdevice], and switch off this option. An iOS 7 security scheme won't allow you to restore the device without disabling the Find My feature, and you can't do that without entering your Apple ID's password (not the passcode you've assigned to the device).

Once you've downloaded the older version of the iOS, connect your device to iTunes, select it, and choose the Summary tab. Hold down the Option key and click on Restore [nameofdevice]. A navigation window will appear. Locate the iOS file you just downloaded and click Update. Your device will go dark and the downgrade will begin. When the installation completes you'll be walked through the usual iDevice setup process.