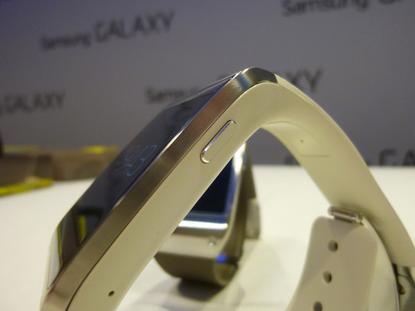 After several months of speculation and a few weeks of hype, the first smartwatch from the world's number one smartphone maker was launched on Wednesday at the IFA electronics show in Berlin.

Samsung's Galaxy Gear links with one of the company's new smartphones, the Note 3, and will allow users to see details of some messages received by the phone, answer and place calls, run a number of apps written for the device and take pictures with an internal camera.

With the watch, Samsung becomes the second major consumer electronics company after Sony to launch such a device. Wearable computing has long been viewed as a potentially lucrative sector and advances in technology -- plus an anticipated wearable device from market trend-setter Apple -- is prompting companies to test out consumer reaction to such products.

In its first incarnation, the Galaxy Gear is very much a companion for a smartphone. It maintains a Bluetooth link with a paired phone and most of the apps rely on software or data on the phone for their usefulness. There is no independent cellular connection from the watch itself.

As such, it will work within a couple of meters of the phone -- and not just any phone. Initially it will only be compatible with Samsung's Note 3, which is launching the same day, and Samsung plans to expand support to some of its other recently sold phones. But the company doesn't appear interested in providing support for older phones or non-Samsung handsets.

The front face of the watch is dominated by a square 1.6-inch screen and there's a single button on the edge of the watch body. The button provides a shortcut back to the home screen with all other interaction done through swipe actions on the watch screen.

The basic display on the watch is a clock face. Users can choose a number of different styles and also have other information displayed, such as the local weather or the number of steps taken as counted by a built-in pedometer.

Perhaps one of the most useful functions is the Gear's ability to provide message and call alerts. Users can answer or silence an incoming call from their wrist -- the watch includes a speaker and microphones -- and see details of SMS text messages and emails received through Samsung's app on the phone. But messages that come through the Gmail app and alerts from apps like Twitter and Facebook will only show on the watch as message notifications. To see details, users will have to pick up their phone.

A built-in dialler also allows calls to be placed from the watch. It has a built-in speaker and dual noise cancelling microphones so it can act as a handset.

The Galaxy Gear will launch in around 140 countries beginning Sept. 25. It will arrive in the U.S. in early October through cellular carriers and is expected to cost around US$299, according to Samsung.