Australian Sex Party gets no love from Google's AdWords

Google has rejected some ads promoting its platform, which touch on drug legalization and euthanasia 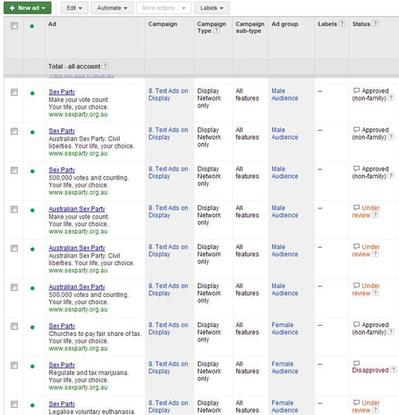 The Australian Sex Party is contesting Google's rejection of several AdWords advertisements related to the party's position on marijuana legalization and the right to euthanasia ahead of the federal election next week.

The Australian Sex Party, a political organization, has a hard time getting some love from Google.

The Australian Sex Party, founded in 2009, is fielding 54 candidates in Australia's upcoming federal election, which will take place on Sept. 7. The party also supports same sex marriage, the decriminalization of personal drug use and better public transport.

The Sex Party has requested a manual review of its AdWords advertisements, which were placed through Google's automated systems, said Fiona Patten, the group's president.

"We are not saying 'Buy marijuana here'," said Patten who is a senate candidate for the state of Victoria. "We are not promoting anything illegal. We are a political party."

One of the ads that was rejected read: "Sex Party. Regulate and Tax Marijuana. Your Life, Your Choice," followed by the party's website address. Patten said her group has budgeted AU$30,000 (US$26,800) to $50,000 for digital election-related advertising, the majority of which will be spent with Google.

A Google spokesman in Sydney said the company does not comment on individual advertisers, but that it was looking into the matter.

Patten said even if the advertisements are approved, the Sex Party has lost out on several days of advertising prior to the election. Even if Google spends 24 hours reviewing an advertisement, "you're losing a considerable amount of time," she said.

"If we are not able to share our policies via online methods, that really limits how we can get our message out there in this election," Patten said. "As a small party, you do have to rely on getting your message out in online forums. We can't afford the television advertising, the radio and print advertising that the major parties can budget for."

Last year, Facebook rejected advertisements bought by the group, but after a manual review, allowed them to be shown, Patten said.

It's not the first time the Australian Sex Party has encountered difficulties in buying ads with Google.

Australian political parties are not eligible for tax-exempt status. The misunderstanding was resolved only one day prior to a by-election.

As a result, the Australian Sex Party filed letters of complaint in September 2012 with the U.S. Department of Justice and the Australian Competition and Consumer Commission. The ACCC rejected the complaint, while the DOJ never responded, Patten said.