If touchscreens eventually become the new normal, does this mean an end to legacy keyboards, as well as devices like the BlackBerry Q10? 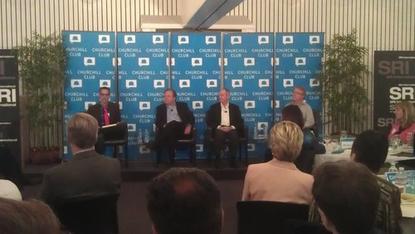 If you're afraid the future of touch-enabled smartphones, tablets, and PCs are going to rip your keyboard from your cold, dead hands, fear not.

Researchers from Xerox PARC and SRI International joined Andy Wilson, principal researcher at Microsoft, Tuesday at a Churchill Club forum at SRI's headquarters in Menlo Park to ponder this question: how will users interact with computers that are beginning to see, hear, and "think" for themselves?

The question had relevance, if only because one of the most famous digital assistants, Apple's Siri, spun off from SRI. SRI also birthed Nuance Communications, which recently told PCWorld that it's working to develop its own Siri-like assistant that will love you.

But the discussion also prompted another question: if tablets, phones, Windows 8, and the Chromebook Pixel are teaching us to use touchscreens and speech inputs, will there be a day when the keyboard becomes the equivalent of the floppy disk and simply fades away?

The gradual disintegration of the BlackBerry Q10 also may have keyboard lovers worrying. TheWall Street Journalreported Thursday that BlackBerry has suffered abysmal sales of the Q10, which was supposed to be the savior of the Canadian company. But the paper quoted one Canadian carrier that reported that sales of the Q10 "just hit the ground and died," and that BlackBerry was offering employees heavily discounted phones as a result.

Bill Mark, who oversees the Information and Computing Sciences department at SRI, said that keyboards will fade away--just not entirely.

"I think it depends on the situation. I'm not sure it will ever happen, because there are some situations where the keyboard is just the right thing," Mark said. "When you think about a pen--or something like a pen, going back to a stylus writing in clay--that's been around for a really long time. That's because it works very well in certain situations. My personal feeling is that keyboards will be like that.

"However, I think we'll be seeing them a lot less, because your example notwithstanding, I think we use keyboards in a lot of situations where they don't belong, because it's what we have," Mark added. "I think those will go away."

Microsoft, of course, has promoted touch as an alternative medium to the keyboard. Microsoft has never said that keyboards or mice would disappear as a result, and Wilson, who helped design the tabletop Surface table and worked with depth cameras--the primary technology behind the Xbox 360's Kinect--agreed.

"I think Bill was right, and I like his answer," Wilson said. "Eventually, it will become more of a niche thing, like programmers for example. You could almost see that with the workstation market. Workstations are going to be these altars to extreme computing, visualization, computational power, Visual Studio. And only a small percentage of users do that."

Wilson also revealed the results of research that Microsoft has done internally, where it provided a number of different means of turning off an on a light switch--using speech, touch, et cetera. (Microsoft used a "Wizard-of-Oz" approach, Wilson admitted, where users only thought they were using technology to switch the lights on and off. Instead, a tech behind the scenes did it manually.)

What users preferred, surprisingly, was to look at the light and then speak to it.

That sounds remarkably like Tobii, a small startup that illuminates your eye with infrared, tracking your gaze on a computer screen. It works remarkably well and, with a keyboard key remapped to simulate a left- or right-button press, the user never has to take his or hands off the keyboard. That, in turn, sounds a lot like the Kinect, which also illuminates a scene to track users.

Wilson said that Microsoft was familiar with the Tobii machines and, in fact, had several of them in its labs. But the Kinect doesn't offer enough resolution to offer the same gaze-tracking capability, he said.

Part of the problem, and the solution, lies in the context, Mark noted. When a user walks into a darkened room, one of the actions he or she is likely to take is to walk to a nearby light switch. And within the PC, a screen with two buttons drawn on it really implies only one of two choices, Wilson added.

Wilson also made an interesting point: an input device like a mouse or keyboard also has a "hidden" form of input: you can set it down, or not touch it, and nothing happens. The problem with devices like the Google Moto X or the Kinect sensor with the Xbox One, is that they're always vigilant.

"I think the challenges that those tools present are very different than what you are using today," Wilson said.