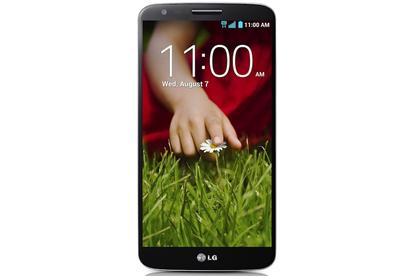 The LG G2 has a large 5.2in screen and moves all physical buttons to the back of the phone.

The key feature is the company's decision to put the volume rocker and power buttons on the back of the phone, just below the rear camera lens.

LG's explanation for this move is that the button placement on the back means the phone will be less awkward to hold and use given the large size.

It says most users' fingers naturally rest where the buttons are, so it will prevent stretching your fingers to reach the keys if they were placed on the top, or the sides.

The G2 has a bezel that's just 2.5mm thick, so the 5.2in screen almost looks like a completely edge-to-edge display.

It's a full HD 1080p display with a resolution of 1920x1080 and LG has used its own IPS+ panel. The ability to double tap the screen to unlock it is a nice touch, and you can also double tap it again to put it back to sleep.

LG has followed Samsung's path when it comes to Android, as it has completely skinned the G2's user interface with its own overlay.

A number of exclusive software features include 'Answer Me', which automatically answers the call when you raise the phone to your ear, 'Plug & Pop', which recommends apps when you plug in headphones or a USB cable, and 'Text Link' which suggests what you want to do when you select text.

There's also a guest mode feature that can restrict apps for kids and other users, an Infrared port that allows the phone to act as a remote control, and the ability to slide open apps away by using a three-finger swipe gesture.

The LG G2 is one of the first smartphones to come with Qualcomm's new 2.2GHz quad-core Snapdragon 800 processor.

The phone has 2GB of RAM and comes with 32GB of internal memory, but there's no microSD card slot for expanding the storage. The G2's large 3000mAh battery isn't removable.

The G2 has LTE connectivity and will work in Australia on all major 4G networks including Telstra, Optus and Vodafone.

LG says the G2 is expected to be released in Australia from November, and it will initially be exclusive to Optus. The handset will have an outright RRP of $699.

LG also confirmed that the G2 will be released on over 130 carriers globally, starting in South Korea followed by North America, Europe and "other key markets".