The changes are coming starting Thursday to iPhone, iPad and Android 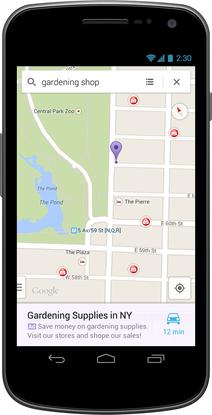 Relevant ads on the Google Maps app can now appear at the bottom of the screen after a user performs a search.

Users of the Google Maps app will soon start seeing more ways to interact with paid content within the app, the company recently announced.

After a user performs a search with the app, ads for local businesses will now appear at the bottom of the screen starting Thursday, the company announced in a blog post.

The new ads will be coming to Apple's iPhone and iPad and to Android-based smartphones and tablets. Google has been placing promotional content in its Maps app since at least 2010, but Thursday's changes provide more opportunities for users to find information about businesses that Google flags as being relevant to their searches.

More than 1 billion people use Google Maps services every month, according to the company.

The new ads include a title, explanatory text and a link to get directions. The paid content will be labeled as such by a purple box reading "Ad," and its icon on the map will be purple instead of the traditional red.

Users will be able to tap or swipe upward to see more information about the business, such as its address, phone number, photos, reviews and more. From there, there are various paid and free click actions they can take, Google said.

Free actions include saving business information for later, sharing a business with a friend, or starting navigation. User clicks for which Google gets paid include the initial "get location details" link, get directions, click-to-call and clicks on the ad headline.

The ads will be priced through Google's auction-based AdWords advertising platform, from which the company derives most of its revenue. Marketers can find information about ad pricing, free clicks and ad eligibility in its AdWords Help Center, the company said.

The "get location details" link, however, results in a standard cost-per-click (CPC) charge, Google said. And AdWords will only charge up to two paid clicks per ad impression.

Google updated its Maps app just last month to improve its searching and navigation features, such as by including incident details to show users reports of problems on the road.

Google generates its revenue primarily through advertising, and the new advertising capabilities in the Maps app give marketers more options for placing paid content. Monetizing its services on mobile is increasingly important as more people migrate away from desktop PCs in favor of mobile devices.