HP Trim, Autonomy Records Manager and Autonomy Meridio have all been rolled into a single records management product 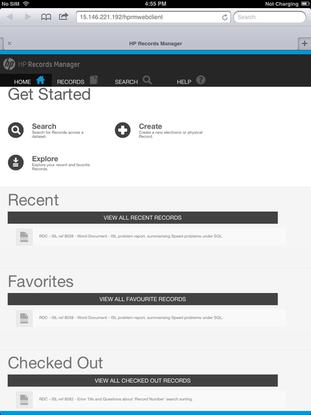 In a move to consolidate overlapping lines of software, Helwett-Packard is merging three of its records management products into a single offering, to be called HP Records Manager.

The company promises that the initial release of the new package will have the best bits from its existing records management products and feature a more practical user interface as well.

"Our customers understood it was not a good decision to continue to maintain three different records management products in the market," said David Gould, HP global director of information governance software. "The goal of HP was to combine the best of those products into a [single] platform, and make it easier to use and more efficient."

The initial release, Records Manager 8, is built on the code base of HP's former flagship records management suite, TRIM, but also will include unique capabilities from the Autonomy Records Manager, and Autonomy Meridio.

The company will continue to support all three product sets for the foreseeable future, Gould said. But the company will provide migration paths that will get existing users of the former products to HP Records Manager when it comes time to update the software. The update process will be more like "an upgrade," than an installation of an entirely new product, Gould said.

HP has been working on the consolidation for well over a year, Gould said. The development staff of all three software products has been combined, as have the marketing and support staffs as well. They are all now working in the HP Autonomy business unit, under the direction of Robert Youngjohns, who heads the unit for the company.

HP also took the consolidation as an opportunity to create a new kind of user interface, one that caters not only to records managers but also to the much broader potential user base of all information workers.

Now, an organization's employees are provided with one interface to create and search records, while the records management officer gets a separate console to handle administrative duties such as creating file plans and retention policies, or to modify the taxonomy thesaurus.

"We're giving customers the ability to push more users into a controlled environment, where content is completely controlled from its creation to its destruction," Gould said.

Records Manager 8 will be available Sept. 15.

HP is currently defending itself against a number of shareholder lawsuits alleging that Autonomy had misrepresented its value to HP prior to the acquisition. Autonomy is mostly known for its IDOL ((Intelligent Data Operating Layer) search and classification software, though it had branched into records management before the HP purchase as well.