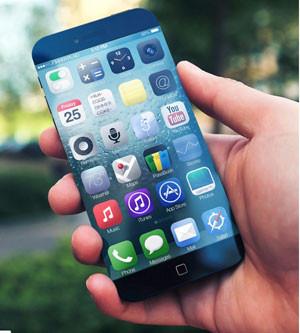 The newest Apple iPhone 6 concept design making the rounds pushes the smartphone's Retina Display across the entire 4.5-inch front surface of the smartphone, backed by a motto of "Your eyes will notice the difference but your hands won't."

This concept comes courtesy of LA designer Johnny Plaid, who does away with the front edges of the phone and covers it in hard to scratch or destroy graphene material. The iPhone 6 is imagined as being the same size as the iPhone 5, though with an aluminum-carbon fiber body, is 40% lighter and 60% stronger.

Plaid's iPhone 6 concept does away with the home button in favor of a customizable "Homepad."

This concept design envisions 2 2.8GHz quad core A7 processors under the covers and 12 hours of battery life while on 4G wireless. The design borrows from the Mac's MagSafe charging technique, allowing for the connector to be instantly detached if knocked into so that the phone won't wind up falling on the floor.

The real iPhone 6, if Apple will even have such a name, is expected by many to be revealed next year. However, speculation is that an intermediate version dubbed the iPhone 5S might appear this fall.

Concepts for the iPhone 6 have been emerging left and right, with another intriguing one shown recently that envisioned a 3-in-1 device that morphs from a phone to a phablet to a tablet.

Bob Brown tracks network research in his Alpha Doggs blog and Facebook page, as well on Twitter and Google +.