So, a comic walks into a tech convention 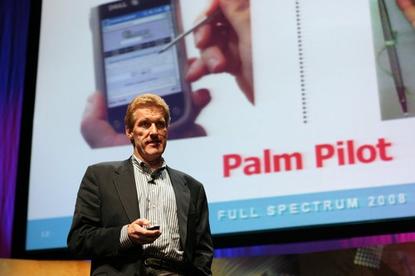 Go to a technology event or corporate meeting these days and you're bound to hear from a guest speaker. It's often someone like a retired politician telling war stories, or a new-age management guru delivering a thinly veiled pitch for their latest book.

Don McMillan, on the other hand, is there to make you laugh.

McMillan, who is 53 -- "35 in hexadecimal," as he puts it -- earned a master's degree in electrical engineering from Stanford in 1982, and later worked on microprocessor designs at AT&T Bell Laboratories and elsewhere until the early 1990s. When his budding sideline in the world of stand-up comedy proved successful enough, he "turned in his chips for a microphone," as his official biography puts it.

"It's not that I didn't like engineering, but when I got off work, I didn't go and read EE Times or Scientific American," McMillan said in a recent interview. "I realized that wasn't me. It was a job, a good job. But comedy was my passion."

McMillan, who lives in Santa Clarita, California, still plays the occasional comedy club show, and no doubt gets recognized now and again for acting roles such as the staffer of the "freshness hotline" in a number of Budweiser beer commercials.

But he spends most of his working time at dozens of technology industry trade shows and meetings each year, where he fetches north of $10,000 for a basic 45- to 60-minute comedy set and even more if he also serves in other roles, such as an emcee. His clients have included Apple, Google, Dell, Sun Microsystems, SAP and Siemens.

McMillan's website jokes that he provides "application-specific comedy." In other words, he customizes each show depending on what the particular company does, as well as its social milieu.

"Comedy's really cultural," McMillan said, recalling one engagement at Applied Materials, which makes equipment for chip manufacturers. "I did nerdy stuff there I would never do anywhere else. Stuff about arsenic and its [semiconductor] doping qualities."

Some of McMillan's more popular bits, such as "Death by PowerPoint," can work in pretty much any corporate setting. In that routine, McMillan uses a projected slide presentation in the course of lampooning the frequent excesses of overzealous PowerPoint users.

McMillan also mines laughs from the perspectives of various departments within tech companies, evidenced by another one of his better-known monologues, "What is Pi?"

If you ask someone that question, you can tell what their job is, according to McMillan. "If you ask a physicist they'll say 3.14159 and if they're committed they'll go on forever," he said in one past performance. "But if you ask an engineer they'll say 'eh, well, about three. But I would use four to be safe.' ... And finally ask most sales people and they'll say well, the engineers will tell you three but I'll get it to you for 2.6."

McMillan also tries to keep his mental chops sharp through changing trends in tech, or at least he tries his best. "I was a hardware guy," he said. "I knew software and have written code. But the minute we get into really high-level software like ERP, I am lost. Every time I learn something, the acronym changes."

"Software is a challenge," he added. "Especially the cloud stuff. Could they have gotten more nebulous than a cloud? That's a marketing guy's dream right there."

Still, McMillan has managed to build up a successful career and a number of repeat customers, such as Don Maulsby, senior vice president of world trade at Mentor Graphics.

Maulsby estimated he has hired McMillan a half-dozen times over the years for sales kickoff meetings, trade shows and even a reunion.

"There are a lot of really funny people out there, but the one thing that's important is, how do you get that connection with the audience," Maulsby said. "There's a kind of special bond I think he can build with the technical community since he's one of those guys that came from that world."