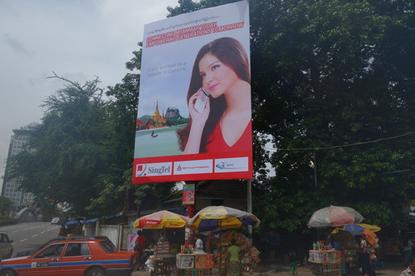 A billboard ad for one of the carriers that lost out in Myanmar's tender for telecom licenses.

Myanmar is a step closer to offering affordable mobile services after selecting two international carriers to launch telecommunications networks in one of Asia's last untapped markets.

Norway's Telenor and Qatar's Ooredoo were named the winners in a government tender that is opening Myanmar's once tightly regulated mobile services sector. The carriers will help provide badly needed telecommunications infrastructure in a nation of 60 million, where only about 5 percent of the people use mobile phones.

Both carriers plan to roll out new networks in Myanmar once the nation's government finalizes the licenses, the companies said in statements posted online. The licences are expected to be awarded to the two successful applicants pursuant to the new Telecommunications Law which the Parliament is expected to adopt in the current session, the Myanmar government said in a statement.

Telenor will bring 3G HSPA and 4G LTE technologies, and plans to launch commercial mobile services in both voice and data in 2014. Ooreddo said its investment will create new jobs.

The networks are expected to help Myanmar reach its goal of raising mobile penetration to 75 and 80 percent over the next three years. In the past, mobile services were not only tightly regulated by the country's then military rule, but also expensive. SIM cards, alone, once could cost US$250, or more.

But since 2011, Myanmar's new civilian government has ushered in new democratic reforms that promise to modernize the country. Starting this year, the nation began offering a limited supply of SIM cards for the low price of $1.50.

By awarding the licenses, the government hopes to make cheap SIM cards and affordable mobile service plans a norm in the country. Already, smartphones makers such as Samsung and HTC have entered the nation's market, and many local handset dealers have set up new shops in Yangon, the country's largest city.

More mobile handsets also means that Myanmar's Internet penetration could dramatically rise over the next few years. Only about 1 percent of the population currently go online, and many people do not own PCs or know how to use them. Cheap smartphones, however, could bring millions in Myanmar to the Web, according to local industry leaders.