Yahoo News gets a redesign aimed at personalisation 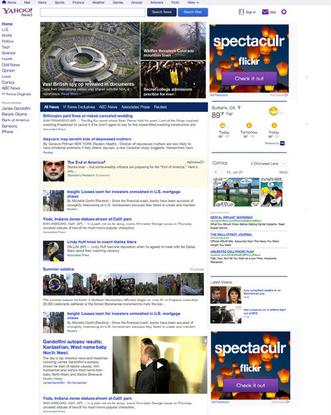 In its continuing efforts to woo users with new products and services, Yahoo is at it again, this time with a redesign of its News Page.

The retooled Yahoo News site, which features "a more personal, intuitive and modern design," the company announced Thursday in a blog post, is a step toward creating a more consistent feel across Yahoo's online properties, the company said.

Under the changes, people can customise their news stream to tell Yahoo which types of content they would like to see more of. And, when people sign in to Yahoo News using their Yahoo ID, the site will become "smarter over time" as it learns more about people's news preferences, to create what Yahoo calls a "personal news hub."

Articles on Yahoo News now also will load faster than before, the company said, and news articles on the site now appear front and center in the content stream.

On iOS, people can also choose between "classic" or a new "visual" design, which fills their mobile device's screen with large images that flow on top of each other as the user scrolls through short news summaries that are overlaid on top of them.

An improved design will be coming to Android-powered devices soon, the company said. "We wanted to be sure you're getting not only a familiar experience but the best experience whether you're sitting at your desk or on-the-go," said Mike Kerns, vice-president of product at Yahoo.

The Yahoo News changes, which will come to US users over the next couple of days, represent Yahoo's latest efforts to demonstrate value to its users as it struggles to compete against companies such as Google, Facebook and Twitter.

Unlike those companies, Yahoo does not offer any hardware like smartphones, or a dedicated social network beyond its Flickr photo-sharing site, or its own Web browser.

"We are making investments, and we are going to continue to make investments, because that's what drives growth," she said.

Prior to Thursday, the company's most recent new product announcement was an overhauled version of its mobile Sports app. Similar to News, the Yahoo homepage also received a redesign in February, with changes geared around bigger, bolder photos and its own personalized news feed.

In May, Flickr was revamped to include a terabyte of free storage.

Yahoo also recently forked over more than US$1 billion to buy Tumblr, in an effort to gain a new cadre of younger users, and also a foothold in the competitive social media advertising market. That deal closed last week.

The company also announced Thursday that it would be growing its team at its facility in La Vista, Nebraska, by creating roughly 100 new jobs across customer care, integration and logistics.

Yahoo opened its data centre there in 2010.