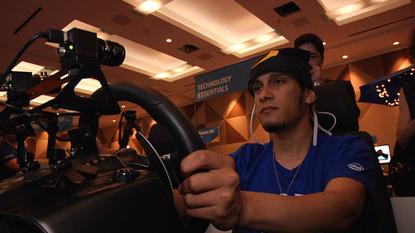 A prototype Intel system reads brain activity from a driver at a San Francisco event on June 25, 2013.

Researchers at Intel are hoping a little insight into the way drivers think as they hurtle down the highway can be harnessed to make roads safer.

The company is using a brain scanning technique called functional near infrared spectroscopy to attempt to differentiate between those times when a driver is focused on the road ahead and when his or her thoughts are occupied with other things.

"We're trying to understand people better, what they're thinking, what they're feeling," said Paul Crawford, a senior research scientist at Intel Labs who is working on the project at the company's Silicon Valley research center. He said the research builds on the sizeable amount of work that has already been done on how people interact with computers and machines such as cars.

"We want to understand cognitive workload, how hard someone is having to work to do something," he said.

In a demonstration in San Francisco on Tuesday, the company showed how it is measuring the brain activity of a driver sitting at a simulator. The driver is navigating a virtual Formula One car around a racetrack at 50 miles per hour in one test, and at more than 250 mph in another test.

Infrared sensors fitted to a cap over the driver's head sensed activity in the outermost 2 centimeters of the driver's brain. By measuring differences between the two drives, researchers start to be able to tell the difference between intense concentration -- when the race car is being driven at top speed -- and the much-reduced amount needed at lower speeds.

That information could one day be fed into a car's computer, which might make adjustments to the environmental controls to keep the driver more alert, or give more or less control to safety features such as automatic braking or lane control.

"With that information, we can say 'maybe they need some additional stimulation, maybe we [change the radio station], maybe we dial up or down the amount of control, maybe we pull you off the car in front of you a little bit," he said.

Road-related injuries are the eighth-leading cause of death in the world and the number-one killer of people between 15 and 29 years of age, according to the World Health Organization. Road accidents killed about 1.24 million people in 2010, the latest year for which global figures are available.

Intel's research is initially focused on cars, but it goes beyond the highway.

"We're leading with cars because it's a well-controlled area that we can do some laboratory research around," said Crawford. "A lot of us get paid to work with our brains, and we want it to be as efficient as possible, so there's all sorts of enterprise-level applications of this, and some consumer-level applications."

That work, being done with the National Taiwan University, seeks to provide vehicle-to-vehicle communications using something already found on many vehicles: LED brake lights.

The researchers are using a laptop computer to modulate the light from the rear lights so it can carry data about the state of the vehicle.

Intel's demonstration used a pair of scooters, which are ubiquitous on the streets of Taiwan. The rear LED light of the front scooter carried an alert each time the brakes were applied or the turn indicators were switched on or off. In motion, the system can also transmit the current speed of the scooter.

A rider on a rear scooter would see an alert on his or her dashboard when the scooter in front is slowing down, speeding up, turning or stopping. In the demo, the modulated light signals were received by a camera mounted on the front of the bike and were displayed via a phone app.

The idea, said Hao Min Lin, a Ph.D. student at the National Taiwan University and one of the team working on the project, is that the extra information would give riders a fraction of a second more time to react. By knowing the scooter in front is slowing, for example, riders would be able to begin adjusting their speed before the brake lights come on.