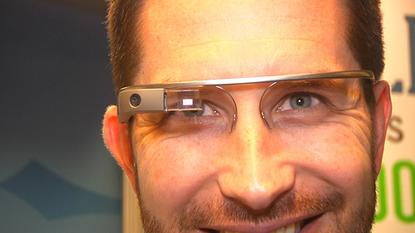 A company that specializes in Google apps is developing a series of enterprise applications for Google Glass that should be available late this year or early 2014.

"We're in the early stages of developing for Google Glass," said Dan McNelis, co-founder of Dito, a company that provides services for Google applications.

Google Glass is the wearable device that the search giant announced in 2012. Since then the system has been in beta with developers and will likely be released to the public in late 2013 or early 2014.

McNelis said Dito is developing both "Glassware" or the apps on top of Google's API (application programming interface), and figuring out specific use cases to develop custom apps for Glass.

(See an interview with Dan McNelis in a video on YouTube.)

Speaking at the E2 Conference in Boston, McNelis said that one construction company that is a client is interested in building information modeling, or BIM, applications. He said BIM comprises the process of going from "a whiteboard of what a specific site would like to a 3D model." McNelis said the benefit of Google Glass' point-of-view system is that a construction worker could walk around a work site, look at a support column and "confirm through Google Glass that it's in the right place and set at the right angle."

He said another example could involve wiring something and instead of "having a schematic off to the side that you have to pick up, imagine that I can just look up with my eyeball and see what the ports are on the schematic to connect into."

"Having worked with Google in the past, one of the things we want to be cautious about is we don't want to build an application to sit on top of an API or platform if it is still evolving," McNelis said, citing two examples of applications that have been shut down by Google. The company made news earlier this month for banning facial recognition and pornography applications on Google Glass.

"Google has specifically ruled out facial recognition on the Glass platform today," McNelis said. "However I suspect that Google recognizes that this is a use case and a need. As the market warms up and Google figures out the right way to solve this, this would be a capability that one way or another would be possible."

McNelis said that he and about five or six others at his company are testing out Google Glass, which sits on a user's face like a pair of glasses without lenses. In front of one eye is a small, clear cube that displays the screen. Users can give voice commands for Glass to complete basic tasks like searching the Web, taking a photo or recording video. Battery life on the device is about three hours under regular use, but McNelis is hopeful that processing power will increase and battery life will lengthen with further iterations of the system.

Nick Barber covers general technology news in both text and video for IDG News Service. E-mail him at Nick_Barber@idg.com and follow him on Twitter at @nickjb.