The particle accelerator is scheduled to start up again in 2015 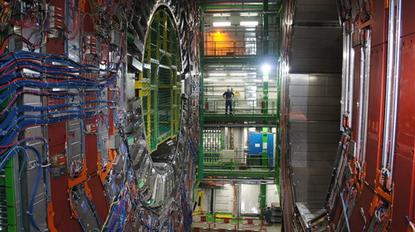 The 12,500 ton Compact Muon Solenoid (CMS) in Cessy, France is the heaviest of the detectors at the LHC. It along with ATLAS (A Toroidal LHC ApparatuS) gathered the data that resulted in the Higgs boson announcement.

Almost a year after the Higgs boson announcement, the world's most powerful particle accelerator, the Large Hadron Collider (LHC), is getting upgraded.

The work will result in increased collision energy and allow scientists to look even more closely at the universe's known and unknown building blocks. The need for the upgrade is related to thousands of electrical connections among the accelerator's magnets that weren't robust enough for the accelerator to run at the energy it was designed to. This design weakness led to major damage to the LHC in 2008.

The Higgs boson is one of two types of fundamental particles, and it's a particular game-changer in the field of particle physics, proving how particles gain mass, according to the CERN website.

During this lull the accelerator's four detectors are also undergoing upgrades and maintenance, and can be viewed in greater detail. The detectors are designed to track the motion and measure the energy and charge of new particles thrown out in all directions after a collision.

The goal is to have the LHC running in the [northern] Spring of 2015.