Reports of scams increased 65 per cent in Australia 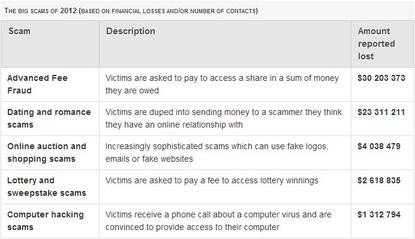 The big scams of 2012, based on financial losses and/or number of contacts.

According to the Australian Competition and Consumer Commission’s (ACCC) Targeting Scams report, $93 million was reported lost in Australia last year.

The ACCC said it received almost 84,000 contacts regarding online shopping scams in 2012, indicating a 65 per cent increase.

Again, this figure represents only incidents which were reported. ACCC deputy chair, Delia Rickard, noted “reports of financial losses to the ACCC are just the tip of the iceberg as victims of scams are often too embarrassed to report their experience.”

The report indicated that phone has continued as the preferred method of delivery by scammers, with combined voice and text message scams comprising 56 per cent of all reports to the ACCC.

Scams delivered online increased to represent more than 35 per cent.

The most reported scam type – for the fourth consecutive year – was advance fee or up-front payment, constituting 32 per cent of all contacts.

“Scammers continue to find sophisticated methods to deliver scams, taking advantage of new technologies and communication methods to try and slip under your radar,” Rickard said.

“Nowadays it can take just the click of a button to fall victim to a scam, so it is more important than ever that we practice safe techniques when communicating with others.”

A full version of the report can be found on the ACCC’s web site.