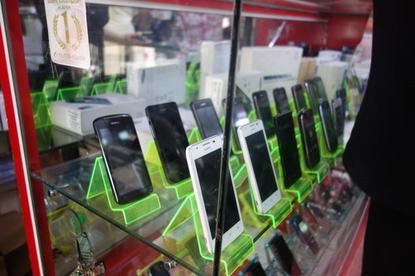 Handsets at a shop in Yangon, Myanmar

How do you build a blockbuster app in Myanmar, one of Asia's poorest countries? You go and ask a fortune teller for help, according to 25-year-old Htoo Myint Naung, a local developer.

"There's a very famous fortune teller in Yangon, he is called San Zamibo. We go and begged him to give up his contents," he said. "We licensed it, and then made an app."

Htoo Myint Naung is just one of the young tech entrepreneurs in Myanmar, a country that is now opening to the world after decades of military rule. Flooding in are investors from across the world, along with the prospect that foreign Internet firms might come in as well, and set up shop. But local developers like Htoo Myint Naung want their piece of the market too, and are doing so through their own local knowledge of the market.

"Lots of new threats" lay in waiting for his business, since Myanmar, also known as Burma, initiated its democratic reforms over two years ago, he said. "Now all the IT companies from outside will try to come inside. Maybe they will kill the locals [Myanmar's domestic companies] and then take over the market."

Currently, only about 1 percent of Myanmar's populace use the Internet, according to industry experts. But foreign Internet services are already dominating the fledgling market. Local residents say Facebook is the most popular website in the country, followed by others including Google's YouTube and Gmail.

Htoo Myint Naung, however, is also tapping into Myanmar's market through methods and ideas only a local would know about, he said.

"Most of these guys [foreign IT companies] don't event try to understand the culture," he said. "That's the problem. They don't know, for example, how big the demand is for fortune telling here."

His company, Technomation, also publishes a dictionary app that is its best seller. But rather than rely on Apple's App store or on Google Play, Htoo Myint Naung distributes his apps locally through partnerships with 200 electronic shops in the country.

Online payments have yet to take hold in Myanmar, and so Technomation's sells its products at the storefront, where consumers can pay for them with cash. His company does this through special USB sticks that electronic shops can use to install the apps on mobile phones. The shops get a cut of the sales, but pay Technomation to "refill" the USB stick after a select number of uses.

The company sells its dictionary app for the relatively high price of $10 and its fortune telling app for $3, but still consumers are willing to buy, said Thar Htet, a local tech entrepreneur at software maker Zwenexsys.

"Actually, the people have the spending power, its just that we don't have a payment gateway for online apps," he said. "Even for the other app makers across the world, they couldn't take the Burmese market. Because the local people couldn't pay for them online. So that's a good opportunity for the developers here."

The country's tech market is still small and only about 5 percent of its people use mobile phones. But many expect that to change soon with government reforms that aim to make mobile phones more affordable. By 2016, Myanmar authorities want mobile penetration to reach between 75 and 80 percent.

Htoo Myint Naung has already made his apps available for iOS, Android and Java. But to meet the demand, he also wants to open his own app store that uses a special payment system suited for local consumers.

"I'm trying to make a banking system without permission from the government," he said. "If that works out alright, my mobile sales could be ten times in two or three months."

"This is the time to forget about my 200 retailers," he added. "That's a big number in the past. But we could sell directly to the customers. That's the opportunity for me."