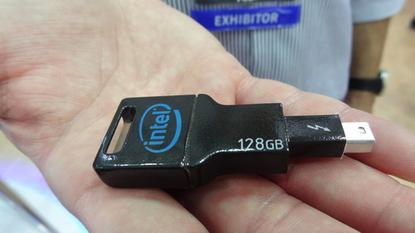 Intel is showing off what it called the "world's fastest thumb drive," which uses Thunderbolt technology to provide breakthrough data transfer speeds compared to flash drives that plug into USB ports.

At the Computex trade show in Taipei, Intel showed a key-shaped prototype 128GB thumb drive that plugged directly into a computer's Thunderbolt port. The drive required no cable and resembled flash drives in size.

This is one of the first thumb drives demonstrated using Thunderbolt connectivity, which is the fastest technology available to transfer data between computers and peripherals, said Oren Huber, a Thunderbolt engineer at Intel Israel.

Thunderbolt can transfer data at a speed of 10Gbps, which is faster than USB 3.0 and USB 2.0. Right now USB 3.0 is about half the speed of Thunderbolt.

Apple's Macs and some PCs are equipped with Thunderbolt ports. Only a handful of Thunderbolt peripherals -- mostly monitors and external storage drives -- are available, and most of them require expensive optical or copper Thunderbolt cables to connect to Macs and PCs. A two-meter long Thunderbolt cable is available from Apple for $39.

The Thunderbolt thumb drive does not require cables, and has a SanDisk SSD to store data. The prototype is a reference design, and Huber said there has been some interest in building products based on the design.

Thunderbolt supports the PCI-Express 2.0 data transfer and DisplayPort protocols. Enhancements in Thunderbolt include support for the latest DisplayPort 1.2 standard.

Intel is also developing a low-power Thunderbolt technology for data transfers from mobile devices to peripherals.