The new AiO and desktop lines will offer CPUs from Intel's new 4th-generation Core Haswell line, as well as AMD. 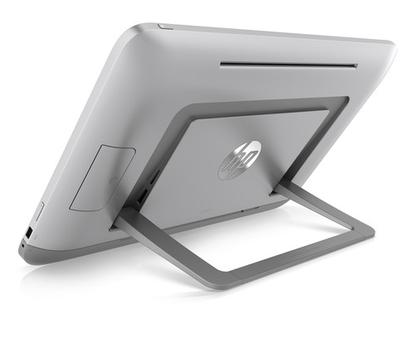 The Envy Rove's hinged stand lets the PC sit at an angle or lie completely flat.

HP's consumer PC sales continue to languish, but the game's not over yet--certainly not on the company's new Envy Rove, a 20-inch all-in-one that can lay flat for multiplayer games. The company also announced a raft of other all-in-ones and desktops today.

The Envy Rove all-in-one's 20-inch LED has a resolution of 1600 by 900 pixels with integrated Intel HD graphics. It's designed to be portable, with an integrated battery rated to last up to three hours. You'll likely be tempted to pick it up by its spring-loaded, hinged stand, which is actually designed to set the desktop at an angle or lay it flat on a surface.

The Envy Rove's 10-point capacitive touchscreen display can function as a gaming table, and it comes preloaded with games including Electronic Arts' Monopoly, Disney Fairies, and Fingertapps Jigsaw Wars and Musical Instruments. The system will use Intel's 4th-generation Core CPUs, code-named Haswell. The Envy Rove will be available in July, for a price yet to be announced.

Their easel stands adjust from 10 to 25 degrees. In addition to integrated webcams, the Pavilion Touchsmart all-in-ones will come with 25GB of free Box cloud storage.

HP also announced numerous desktop PCs today. Notable among them are the Phoenix 800 Desktop PC, a gaming system that will use Intel's 4th-generation Core CPUs, Nvidia discrete graphics, Beats Audio, and optional liquid cooling. It will be available on June 5th for a starting price of $1,099.

The more serious-minded cousin to the Phoenix 800 is the Envy 700 Desktop PC. Designed for configurability, it has a tool-less side panel and the capacity for up to three hard drives or solid-state drives. Nvidia discrete graphics or AMD graphics options are available. Offering a choice of Intel's 4th-generation Core CPUs or AMD CPUs, the Phoenix 800 will go on sale June 5th starting at $599.

With consumer PC sales struggling, HP CEO Meg Whitman admitted today, "we have to take another look at the low end of our product line." Other than the Envy Rove and maybe the Phoenix 800, there's nothing in the new line of desktops that helps HP stand out--and even the Envy Rove has competition from huge tablet PCs by Lenovo and others. But with new CPUs and a new version of Windows coming along soon, HP may at least hope for a rising tide of interest in new PCs.