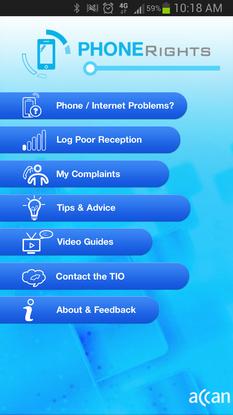 Available for free for both Apple iOS and Google Android users, the ‘ACCAN Phone Rights’ aims to allow users to record the time and location of any telco-related issues which can then be translated into official and justified complaints.

The app also contains a range of advice on basic troubleshooting, as well as tips on ways to make official complaints against telcos; it is basically a guide to the user’s rights (as the name suggests), and a ‘how-to’.

“One of the most frequent complaints we hear from customers is about call dropouts and slow Internet,” ACCAN spokesperson, Elise Davidson, said. “If you’ve signed up to a contract and you’re not getting the service you’re paying for, it’s worth making a complaint to your provider about it.”

The app itself is not exactly fascinating; it is aesthetically and operationally basic, but this appears to be its intent. It is divided five primary sections, tailed by a contact and feedback tab.

The ‘Phone/Internet Problems?’ segment offers a list of possible problems which can be tapped into for ways to resolve them. Further down, the ‘Tips and Advice’ section works similarly, although resembles more of a ‘service provider 101’ designed to help customers with general information, such as picking a telco, avoiding bill shock, and travelling. The ‘Video Guides’ put some of these issues into a different format.

‘Log Poor Reception’ and ‘My Complaints’ are the key areas for customers. The former records signal strength and what sort of connection (3G, 4G or other) is available to which the user can attribute a location. Once logged, the records appear in the latter category, accompanied by complaint registration forms and contact options for both providers and the TIO.

Users may find the app to be sluggish at times, especially when accessing videos, although, in general it is consistent.