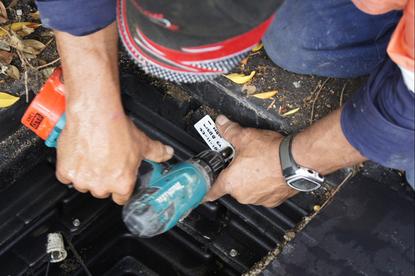 Brunswick NBN rollout in 2010: More than 40 pits were completed before the tagging idea became standard practice so each and every one was being re-opened in two man operations.

Households that have switched to an NBN service download more data than they did before, according to a study by the University of Melbourne and Swinburne University.

About 62 per cent of households that switched to NBN reported an increase in the volume of their home Internet use.

The study, funded by the Australian Communications Consumer Action Network (ACCAN) under the 2011 Round of the ACCAN Grants Scheme, examined the takeup, use and implications of high-speed broadband of 282 households in Brunswick, Victoria, one of the first areas to receive the NBN.

NBN-enabled households were twice as likely to work from home and had a greater number of connected devices than they did previously, the report identified.

“The thing that people say they like most about the NBN is the speed and the data capacity. We’re not too surprised to hear this – right around Australia people are telling us they want access to reliable, quality broadband at an affordable price,” ACCAN spokeswoman, Elise Davidson, said.

About 49 per cent of those with an NBN service said there was no real impact on the price they paid for an Internet service, with 37 per cent of them paying more, and 14 per cent paying less for NBN-enabled services.

For those who saw increased costs, the rise was often accompanied by increased Internet speeds, whilst for those whose costs decreased it was due to a substitution of landline telephone for a VoIP telephone service, in which the cost of data and voice were bundled in a single service plan.

“The research indicates people are willing to pay a bit more to get high-speed Internet and larger download allowances. For others, their monthly costs went down because they were able to switch from a landline phone service to VoIP,” Davidson said.

Other findings from the study include: