Sequel console confirmed for release later in the year 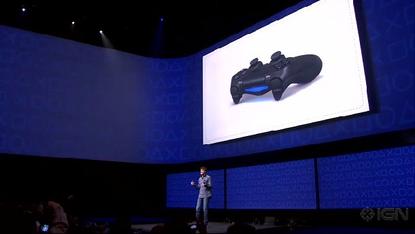 Despite the existence of tetraphobia in Sony’s home turf of Japan, the electronics manufacturer has gone with the sequential naming for its next gaming console.

When unveiling the PS4, Sony Computer Entertainment president and group CEO, Andrew House, called the console a “moment of truth and bold step for Sony as a company.”

He went on to say the console will strengthen the PlayStation ecosystem in the three areas of software, hardware, and online. “The living room is no longer the centre of gaming, the gamer is,” he said.

Sony’s vision for the future of gaming is “consumer centric, developer inspired,” and to that end the PS4 has been developed to be studio friendly.

House said there is potential for Vita in the living room, and the PS4 will enable this. “It provides a glimpse into the future of play,” he said.

The PlayStation 4 is expected to mark a significant shift from a box/console to being the “leading authority on play.”

Having seen the strength of indie titles on PSN, the PS4 will provide “new business models allowing for flexibility.”

Responding to the development complexity of the PlayStation 2 and 3, the PS4 has an architecture “like a PC, but supercharged.”

To that end, it features an unspecified x86 CPU, a “highly enhanced” GPU, 8GB of RAM, and a hard drive. The CPU has eight cores and the CPU and GPU are on the same die. GDDR5 RAM is used for the GPU, and the video hardware is powerful enough so that dedicated computing tasks can be run on it.

Update: Sony has released additional information that confirms the CPU as a custom 8-core AMD "Jaguar" x86-64. It comes with an integrated AMD Radeon GPU capable of driving 1.84 teraflops.

The choice of optical drive, whether it is Blu-Ray or not, was not mentioned by Sony, nor was the options of connectivity such as USB. A case design, either prototype or final, was not shown either.

UPDATE: Sony confirmed that the system will ship with a Blu-ray drive. On the connectivity side, it will comes with built-in 80.211 b/g/n Wi-Fi, Bluetooth 2.1 and USB 3.0. For video, it will have HDMI, analogue AV, and optical digital output.

What Sony did show was the DualShock 4 controller, which has already been leaked to the media leading up to the PS4 announcement. Sporting a familiar DualShock design, the controller also has a touchpad, a share button, headphone jack, and light bar.

UPDATE: Sony clarified that each system will include a "Mono Headset," which can be used for in-game chat and social features.

The PS4 will also come with a stereo camera, dubbed Eye, that looks reminiscent of the Kinect peripheral on the Xbox 360, enabling motion tracking during gameplay.

UPDATE: Sony has said that the Eye uses a 1280x800-pixel sensor capable of capturing video at 60 frames-per-second.

The console has suspend/resume functionality via power button that mimics what the Vita does, and a dedicated chip in the console is used for upload and download of data.

Digital titles are optimised to they are playable as they download.

Sony is pushing social gaming with the PS4, and will be launching a friend network based on real friends, though anonymity is also available. Improved video compression techniques will further add to the social play experience.

The updated PlayStation Network store will allow for personalisation, and over time will learn the user’s likes and dislikes, organising content by the player’s tastes.

Sony’s acquisition of Gaikai last year has resulted with integration in the PSN store, such as letting players try out a game in real time over the Cloud. Players can try it for free, share it if they like it, and then pay and download it.

Gaikai is also used for spectating, where the share button can be used to instantly broadcast gameplay to other users. Friends can also look over the player’s shoulder and interactive with them during gameplay, even going as far as to take over the controller virtually and assist.

Remote play is built into the PS4 architecture and the Vita is used as a companion device. The goal is to have every PS4 title playable on Vita via remote play.

PlayStation 3 backward compatibility will not be included with PS4, but Sony hopes that with Gaikai titles from PlayStation 1, 2, 3 and handhelds will be made playable on it in the future.

The games of PS4

Epic showed a demo of Unreal Engine 4 running on the PS4 hardware while Sony showed off its new platformer, Knack.

Killzone: Shadow Fall, a spin-off of the first person shooter franchise, was shown, as well as Driveclub, a team based racer.

InFamous: Second Son, a sequel to the open world superhero franchise, was introduced, as was Witness, a first person puzzle game.

Capcom showed off its currently codenamed Panta Rhei engine, which is the successor to its MT Framework, as well as a fantasy game being built with it, called Deep Down.

Ubisoft demonstrated Watchdogs, its open world adventure game, while Square Enix will have its PS4 titles on display at this year’s E3.

Blizzard Entertainment made a surprise appearance to announce Diablo III will be coming to PS3 and PS4, optimised for the controller setup.

Activision showed its recently unveiled Destiny, the new first person shooter from Bungie, adding that there will be supplementary content “just for the PlayStation community.”

No price or firm release date for the PS4 was announced beyond “holiday 2013.”