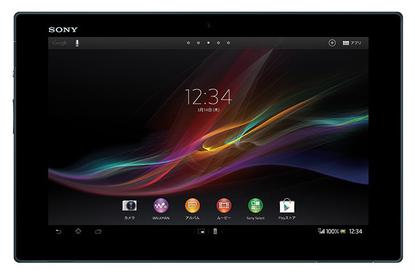 Sony has lifted the lid on its latest Android tablet, a 10.1in device that's thinner than Apple's iPad mini.

The Sony Xperia Tablet Z is just 6.9mm thick, making it the thinnest tablet on the market that we're aware of. It will be available in black and white models and has a similar design to the company's Xperia Z smartphone.

Sony has confirmed the Xperia Tablet Z is water and dust resistant. It weighs just 495g, making it the lightest 10.1in tablet on the market.

The Sony Xperia Tablet Z is powered by a quad-core 1.5GHZ processor, has 2GB of RAM and comes with 32GB of internal memory. There's also a microSD card slot to expand that memory.

The Xperia Tablet Z has an 8-megapixel rear-facing camera that includes a backside-illuminated sensor to better capture images in low light. There's also a front-facing 2.2-megapixel camera for video calls.

The Xperia Tablet Z has a non-removable 6000mAh battery. By comparison, Google's Nexus 10 has a 9000mAh battery. Sony is yet to publish any battery life figures.