The Kogan Agora is a low-cost, dual-SIM Android phone that will retail for $149 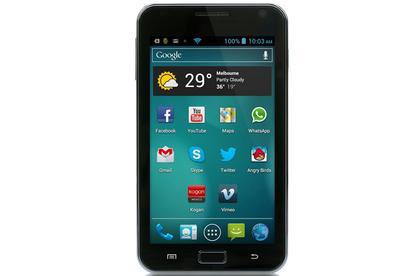 The Kogan Agora will retail for $149 when it begins shipping to Australia in February. The standout feature is a large 5in screen and a dual-SIM card slot, but the phone also includes a 5-megapixel camera, 4GB of internal memory and a microSD card slot.

The Agora's 5in screen has a display resolution of 800x480, which is significantly lower than most smartphone screens of this size. Weighing 180g, the Agora is also far from the lightest device on the market. Most users will accept the weight as a tradeoff, but it's still something to consider if you're a first time smartphone buyer.

The Kogan Agora is a dual-SIM smartphone, but only one SIM card slot is compatible with Australian 3G networks. The second SIM card slot is only 2G compatible. The phone does not support the latest 4G networks offered in Australia by Telstra and Optus, but that's to be expected at this low price.

The Kogan Agora is powered by a 1GHz dual-core processor, has 512MB of RAM and comes with a 2000mAh battery. Kogan has not published any talk time or standby time specifications on the product listing page of its Web site so battery life is unknown.

The Kogan Agora smartphone will initially ship with the Android 4.0 (Ice Cream Sandwich) operating system. There's no word from Kogan if or when the phone will be updated to the latest version, Android 4.2 (Jelly Bean).