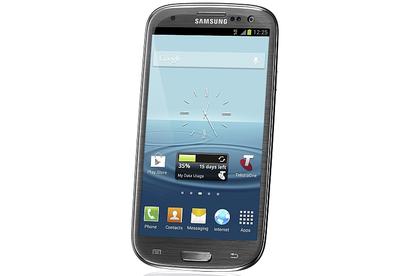 Samsung announced the arrival of the 4G-capable version of its flagship Galaxy S III smartphone last month, but the phone first launched on Optus' new 4G network a week ago.

Telstra said the new 4G model won't replace the existing 3G version of the Galaxy S III. The handsets are almost identical with the exception of LTE 1800MHz network capability, which allows the former to work on the Telstra and Optus 4G networks in Australia.

The 4G model also has 2GB of RAM compared to the 1GB RAM in the regular 3G model and ships with the latest version of Google's Android operating system, 4.1 Jelly Bean.

Telstra will sell both the "onyx black" and "titanium gray" colour variants of the Galaxy S III 4G, whereas Optus only stocks the gray version.

The Samsung Galaxy S III 4G is available a range of Telstra plans starting from its "small" $60 Connect plan over 24 months. On this plan, the Galaxy S III 4G comes with a $6 handset repayment per month for a total of $66 per month over a two year contract. The plan includes $600 worth of calls and MMS message, unlimited SMS messages and 1GB of data per month.

The Galaxy S III 4G is available on Telstra's $80, $100 and $120 Connect plans without an additional handset repayment and will also be sold on a range of Telstra's business plans.

Telstra has set up a pre-order Web page for the Galaxy S III, citing an expected delivery time of between five to nine business days at the time of writing.

Earlier this month, Telstra announced that it is currently expanding its 4G mobile network coverage, promising to cover 66 per cent of the Australian population by mid-2013.