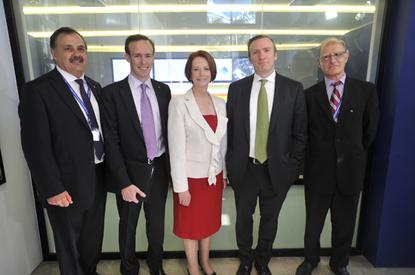 Prime Minister Gillard claimed that the introduction of the NBN will put Australia in the ranks alongside other countries with high speed broadband and improved telecommunications facilities.

“The benefits of the digital world are compelling. Economically, the Internet directly contributes $50 billion a year to our economy and that is set to increase to $70 billion a year by 2016. Each 10 per cent increase in broadband penetration can add 1.3 per cent to the GDP of a high income country,” she said.

She added that data security is fundamental to the trust that businesses and the government place in the Internet.

The government will be focusing on energy efficiency and sustainability in the coming months as it considers broader Cloud computing policies, she said.

“We should see the potential of what is being achieved here. It is leading the way to the future of a high skilled, high tech, high wage economy. If there ever was a time in our nation’s history to invest in innovations, smart technology, skills and training, and the NBN, this is it,” she added.

David Tudehope outlined how the NBN and carbon pricing policy are key drivers for the datacentre investment. He claimed that it is changing the way that local businesses think about IT and Cloud computing.

“Businesses have talked about the importance of energy efficiency and their carbon footprint. Together with the distribution networn, the NBN, these new datacentres are about this wave of change,” Tudehope said.

According to the company, the $60million, 20,000 square metre facility represents a critical local investment as Australian businesses and government departments move away from in-house IT infrastructure to the use of shared infrastructure and services in the Cloud.

It claimed the shift generates opportunities for Australian businesses in unlocking capital and allows flexibility to adapt to an evolving global economy.

Speeches were followed by a short facility tour.

Macquarie Telecom also most recently signed a partnership with Canstar and named William Priest as its operations group executive.

Macquarie Telecom announced a record net profit after tax (NPAT) of $19.6 million for the full year ending June 30, up 10.6 per cent from the previous corresponding period.