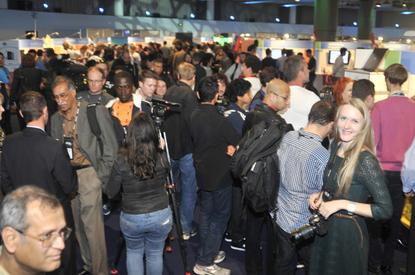 The crowd at the Microsoft Imagine Cup

Students from various countries took on the challenge of creating technologies that aim to make a difference in the world as they participated in the Microsoft Imagine Cup 2012 finals held at the Convention and Exhibition Centre in Sydney.

After facing strong competition from 106 other groups, Team quadSquad from Ukraine beat the rest to be named the ultimate winners of the Microsoft Imagine Cup 2012, going home with a $US25,000 grant.

“We’ve seen some incredible innovations. For those teams that participated in the competition, winners or not, they are going out of this with the same dream that they came with,” Microsoft Australia managing director, Pip Marlow, said.

The team representing Australia, Team StethoCloud, created a technology that was aimed against child pneumonia.

“Pneumonia kills about 2 million children under the age of five every year. The problem here is that healthcare workers are unable to track pneumonia in the earlier stages,” one of its four group members, Andrew Lin, said.

As such, it ported the WHO Unicef guidelines onto a smartphone which automates the diagnosis of pneumonia using a ‘home made’ stethoscope.

Lin claimed that the all the data collected is sent out to the Cloud service, which then uses an algorithm to calculate if the child has pneumonia.

“From that, the future is more exciting with big data. We aim to collect all that data collected in the field to analyse it. This can lead to looking into other diseases such as asthma monitoring,” he said.

This was the first instance Lin and his other team members, Hon Weng Chong, Kim Ramchen and Mahsa Salehi from the University of Melbourne represented Australia. They beat six other teams for the national win.

The Microsoft Imagine Cup will be held in Moscow, Russia next year.

Check out the video from Microsoft Imagine Cup 2012.