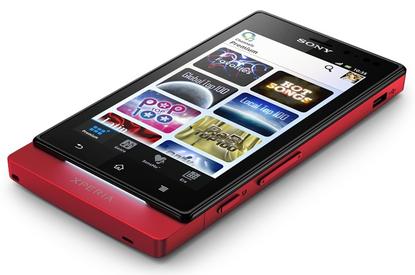 The Xperia Sola is the fourth device the company has announced since it took full control of the Sony Ericsson joint venture last October but only the second the company has officially launched in Australia. The phone is positioned as a low to mid-range Android device but it doesn't appear to have gained any traction with Australian carriers Telstra, Optus and Vodafone.

The Xperia Sola follows the same design principles of Sony's Xperia S, Xperia P and Xperia U but introduces a new feature called floating touch. This allows users to browse the Web without actually touching the screen and works by hovering your finger above (up to 20mm) the display as if it were a moving cursor.

The floating touch feature is initially implemented in the Xperia Sola's Web browser only, though Sony says it plans to extend it to further applications once it upgrades the phone to the latest version of Android, 4.0 Ice Cream Sandwich. The Xperia Sola currently ships with Android 2.3 Gingerbread and Sony hasn't provided a firm date as to when the upgrade will become available.

The Sony Xperia Sola has a 3.7in Reality Display and Sony's Mobile Bravia engine, which claims to enhance sharpness, contrast and colour saturation of photos and videos while also minimising digital image noise. Other features include a 5-megapixel camera that uses Sony's Exmor R image sensor to aid low light shooting, a 1GHz dual-core processor and 8GB of internal memory along with a microSD card slot for extra storage.

The Sony Xperia Sola also includes an NFC (Near Field Communications) chip and comes with two Xperia SmartTags. Once configured, tapping your phone against a SmartTag can enable it to activate various settings and commands. These could include turning your phone on silent when you get into the office and activating Wi-Fi, or turning on Bluetooth and turning off silent mode when you get into your car.

The Sony Xperia Sola is available now through Harvey Norman stores for $486 outright.