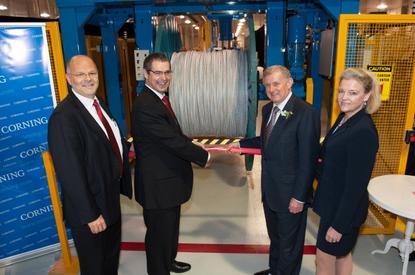 The deployment was initiated to further develop Corning’s Australian-based manufacturing and assembly capability to meet the demands of the National Broadband Network (NBN) rollout.

As a primary NBN Co supplier of optical fibre cable and hardware for the NBN, Corning plans to invest up to $40 million in its Clayton operations, related equipment and personnel training – keeping in pace with NBN’s expected rate of deployment.

According to the company, the implementation of ribbon fibre cable technology is vital for the NBN FTTH network architecture as its compact quality enables more fibres to be pulled through a pipe and quickens installation time.

The program was launched by minister for broadband, communications and the digital economy, Stephen Conroy and federal member for Hotham and minister for regional Australia, regional development, and local Government, Simon Crean.

Crean stated that the investment in the region will offer an economic boost and create more jobs for the Victorian community.

“By investing in the NBN, the Gillard Government is securing Australia’s economy for the future. This includes creating 21st century manufacturing jobs like the up to 300 to 400 here at Corning, as well as ensuring all Australians are able to share in the benefits of fast affordable broadband,” Conroy said.

In the coming months, it plans to open an additional production facility, as well as increase the capacity at its Clayton operations for two of its hardware products key to fibre- to- the-home installation: the FlexNAP RPX Cable Terminal Distribution System and the Fibre Distribution Hub (FDH).