Wozniak glad he never had to run Apple

"If we had engineers making all the decisions there it would have been very bad," according to Apple co-founder, Steve Wozniak 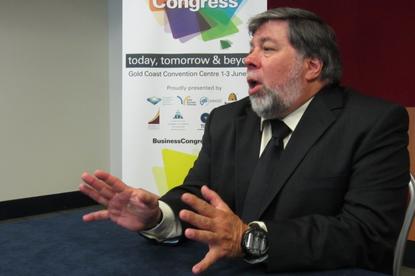 "The Woz" at the Australian Chambers Business Congress 2011 last year.

Engineers may be a vital part of Apple’s success but the tech giant’s co-founder, Steve Wozniak, is glad they aren’t the ones calling the shots at the company.

He was speaking at Woz Live, an event hosted by iiNet in Sydney.

Wozniak co-founded Apple Computers with Steve Jobs back in 1976. Wozniak was the engineer behind the company while Jobs was more focused on the business, marketing, and design side of things.

Jobs passed away last year at the age of 56.

Wozniak left Apple in 1987 but remains on the company’s payroll and is still a shareholder.

"The big company thing just wasn’t for me - I didn’t want to run a company," he said. "When I started apple, I made a decision: I wanted to be an engineer forever... and I did not want to be running the company."

While Wozniak is passionate about his own field of study, he was grateful engineers didn’t dictate how Apple operated.

“Fortunately at Apple, the major decisions were not made by engineers,” he said. “… If we had engineers making all the decisions there it would have been very bad.”

He acknowledged engineering efforts are crucial in the development of Apple’s products but said engineers are often insensitive to what makes for a great user experience or can be bogged down by technical details that have no user impact.

“You can also have all the engineers come up with ideas [that all want their ideas incorporated] and you wind up with something that’s so overgrown and complex,” Wozniak said. “Apple products are very much different – That’s thanks to basically having one mind at the top that would not let them get overly complicated.”

Apple products may have stripped down functions but they still allow users to perform most tasks, he said.

Wozniak is by no means trying to demean the importance of engineers in the creation of consumer products. The suggestions of engineers should be taken on-board, to encourage free thinking, but not all of them have to be accepted, according to Wozniak.

But, in his view, the best way to nurture the creativity of tech engineering staff is to give them access to resources, such as computer parts, and let them use it for whatever purpose they want.

“Let them build anything they want to build on their own time for their own house, their own life,” Wozniak said. “You will have people that build stuff for themselves paying so much attention in making it so perfect – those skills are going to copy over to work projects and you’re going to get a very cheap education [for the engineers[ compared to a university education.

“It also makes them feel very proud of what they are able to accomplish even if it’s not in a company product.”