Want Siri on your Android phone? Try these apps 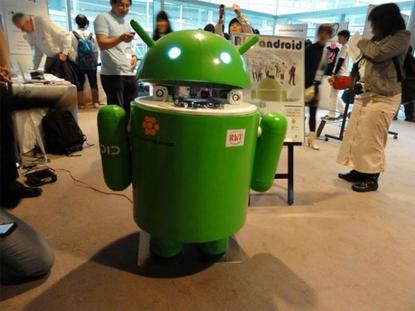 Wouldn't you like to have your very own gofer dedicated to doing all the menial tasks you hate? That's a big part of the appeal of the iPhone 4S: Siri, the voice-driven virtual assistant, turns anyone with a couple hundred bucks into a CEO attended by a full-time lackey. But can you get the same kind of slavish devotion from an Android phone?

I've spent the past week auditioning all manner of Android virtual assistants, most of them free, including Google's Voice Actions app, the awkwardly named Speaktoit Assistant, and a digital "intern" named Eva that interrupted my conversations to hector me about upcoming appointments.

I've concluded that you can find decent virtual help on an Android phone, but the assistants available likely won't be as smooth and capable as Siri. Siri is like the classic executive secretary, always well-dressed and possessed of an elephant's memory and a dry wit. Android assistants are more likely to show up with their shirttails hanging out occasionally. They don't know how to do some things that Siri can do, and they usually won't get your jokes. But that doesn't mean they aren't helpful.

Both Apple and Google send what you say to their servers, whose powerful processors decipher your speech and then send a text version back to your phone. Google's speech recognition is uncannily accurate. I found it superior to Siri's (though in fairness, I didn't spend nearly as much time with Siri as I did with my Android phone).

So virtual assistant from another differ from one another primarily in their ability to execute your commands after receiving them from the server. I put all of the helper apps I tested through a series of 18 tasks, from checking the weather and stock prices to sending an email message, mapping a location, and tweeting. My favorite assistants: Speaktoit Assistant and Google's Voice Actions.

I spent a lot of time last week talking to my phone and I found it oddly helpful that the free Speaktoit Assistant presented me with an actual (albeit animated) person that I could talk to. You can alter your assistant's appearance in myriad ways, including changing his/her sex, hair style, and nose size. Female assistants can wear anything from a formal gown more appropriate for a red-carpet event to a skimpy vest-and-tie combination that looks as though it belongs (temporarily) on a stripper.

Speaktoit handled most of its assignments well, including checking the weather, making phone calls, and answering questions (for instance, "How tall is the Empire State Building?"). When I asked Speaktoit to search the Web or to find a location on a map, it brought the results up in a window of its own, rather than opening my default browser or mapping software. But you can touch an icon in the corner of the window to bring up the same information in the default apps.

I liked the app's approach to sending texts and email. It would transcribe my message and then put it in the message field of my phone's default app. That arrangement left it to me to manually choose the recipient, add a subject (in the case of an email), and press Send. Though the approach isn't as hands-free as the way Siri handles the same tasks, it's superior to how many other Android assistants do it. Speaktoit also successfully tweeted and posted status updates to Facebook, which Siri can't do without a workaround.

Speaktoit was one of the few Android assistants I tested that could figure out how to play music from my collection, with this limitation: Whether I asked it to play an album or an artist, it played just one song from the album or artist, a selection that it seemingly chose at random. Another idiosyncrasy: Speaktoit can tell you your agenda for today, but not for any other day.

Most virtual assistants claim that they can figure out what you want regardless of how (within reason) you phrase your requests. Google's free Voice Actions assistant--part of its Voice Search utility--demands a more consistent approach. To use this app, you must employ Google's set phrases. To play music, for instance, you have to say "Listen to Benny Carter" rather than "Play Benny Carter." Google's app is somewhat more limited in what it can do, too: In addition to playing music, it can send texts and email, make calls, map a location, give directions, write a note, search the Web, and go to a specific site.

For a number of tasks, however, Voice Actions wasn't quite as hands-free as I might have wished from a virtual assistant. When I asked for the day's weather, for instance, instead of reading me the day's forecast--as Speaktoit Assistant did--Voice Actions searched the Web for a weather report that I had to read off my screen; this arrangement isn't a problem if you're walking along the street, but it's definitely inconvenient if you're driving.

Vlingo is one of the few Android assistants that doesn't rely exclusively on Google's voice recognition system. You can choose to use Google's system or Vlingo's home-grown processing. My advice is to stick with Google. I tried Vlingo's voice recognition and found it generally disappointing.

In fact, I was disappointed by this free app overall. It couldn't perform a number of functions--such as reading me my calendar or setting an alarm--at all. Even odder were capabilities that it had one day and seemed to lose the next. The first time I tested Vlingo, for instance, it did a competent job of preparing an email message. But the next time I asked it to "send an email," it simply offered to Google the phrase "send an email."

Vlingo does have some bright spots. It can send tweets and update your Facebook status. Also, when you give Vlingo a command, it continues listening to you until you press Done. Many other systems stop listening as soon as they detect a pause, forcingyoutospeakreallyfastsothattheydon'tcutoffbeforeyou'redone.

Next: Jeannie and Eva Intern

Up until about a week ago, this app was called Voice Actions, just like the Google app. To end the confusion, the third-party developer, Pannous, changed the name of its app to Jeannie (it still shows up on my phone as Voice Actions, however, even though I've updated the app). Jeannie is free. Alternatively you can purchase a $3 Voice Actions Plus app with the same capabilities. Pannous says that the Plus version of the app should process your speech more quickly.

Unfortunately, signing up Jeannie as your personal assistant is a bit like hiring a slacker with a poor work ethic. When I asked Jeannie to send a text, for instance, it asked for the recipient's name, but then just switched me to my texting app, without starting the text or adding the name of the recipient. (Jeannie can be a bit passive-aggressive, too. It asked whether I wanted to leave it to go to my texting app. When I said "Okay," it responded "Okay by me, too." Ouch.)

Other things Jeannie did were just mysterious. It set an alarm when I asked it to, and the alarm went off right on schedule, but I couldn't figure out how to turn it off because Jeannie hadn't set it using Android's built-in alarm system. When I asked Jeannie to take a note, it started recording me--but never showed me what it had transcribed. Instead, it simply said "Done," and then told me I could send the note by email "later." It wasn't clear to me how.

One of my tasks involved asking each of the personal assistants to get me Apple's stock price. Many of them fell short in various ways--giving me a general market report, for instance. But Jeannie's response was the most surreal: It searched the Web for images of apples and presented those to me.

Eva is like a job applicant who seems brilliant in the interview, but who you end up wanting to strangle after a couple days of frustrating collaboration.

Eva is represented by a photo of a brunette who is attractive but (to my eyes anyway) has an underlying air of vapidity. A companion app called Evan gives you the option of ordering a guy around, if you prefer; he looks like a model from the cover of a romance novel. The list of things that Eva/Evan can theoretically do is impressively long: Bulletproof, which designed the app, says that it can create expense reports and journal entries, start applications, post to Facebook, make playlists, and manage contact groups. (Eva Intern is free only for the first 28 days, by the way; after that, you have to pay $9 for the full version.)

You might imagine that any one of those would be close enough for an intelligent assistant to figure out. But Eva's reaction was "I'm sorry, I heard what you said but I don't know how to interpret it. Please try again."

Eva also had the annoying habit of popping up unsummoned--even when my phone was asleep--to read calendar entries to me. "Hi Ed, I'm reminding you about conference call with Stacey in CR-500 at 5 p.m." Even more annoying was that the app insisted on reading each calendar entry three times. Eva's instructions said that the virtual assistant would be quiet if I asked it to, but the ensuing peace lasted only until my next appointment, when Eva would again implore me three times not to miss the impending meeting. There may be another way to get Eva to shut up, but I never found it. The app's instructions are the longest and wordiest of any mobile app I've seen; and after plowing through them for a while in hopes of solving an immediate problem, I usually lost patience with trying to use them.

Finally, I wrote a calendar entry reminding me to uninstall Eva as soon as I'm done with this story. That may be the only time I'll be glad to hear this virtual assistant's voice.