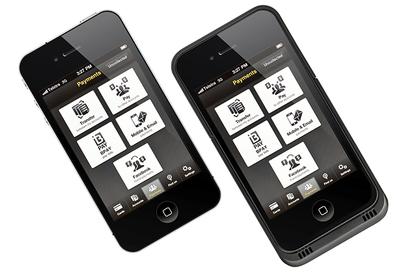 The Commonwealth Bank has unveiled a new banking application for Apple iPhones that allows users to wirelessly pay for goods and services using NFC (Near Field Communication) technology.

Available "in the coming months," the Commonwealth Bank's Kaching app (pronounced Ka-ching) will work with a specially designed case for the iPhone 4 and iPhone 4S smartphones. It will be the world's first commercially available iPhone app that utilises NFC technology.

The compatible iCarte case has a built-in NFC chip that allows users to pay by tapping their phone on a contact-less PayPass transaction terminal: CommBank says it takes around one and a half seconds to make a payment. The case can eventually be ordered on Commonwealth Bank's Web site.

CommBank describes the NFC-enabled case that works with the Kaching app as "interim technology" until NFC chips are built into the iPhone itself. Apple is widely expected to introduce built-in NFC technology into the next generation iPhone. The only smartphones with a built-in NFC chip that are currently sold in Australia are Google's Nexus S, Nokia's C7 and N9 and the BlackBerry Bold 9900.

CommBank says the Kaching app and its NFC features will eventually be rolled out to Google Android smartphones in the near future, but will launch exclusively on the iPhone. The bank says 91 per cent of its mobile banking logins come from iPhone and Android devices but a very high 79 per cent of these logins are strictly from iPhones. It therefore chose the most popular iOS platform to launch the Kaching app on.

In addition to wireless NFC payments, the Commonwealth Bank's Kaching app is also the world's first to provide peer-to-peer payments (P2P) via mobile, e-mail and Facebook. The Kaching app links to the iPhone's address book to enable mobile and e-mail payments, while the app will link direct to your Facebook ID to enable payments via the social networking service. The Kaching app will enable mobile, e-mail and Facebook payments to non Commonwealth Bank customers by directing these users to a secure, external site to collect payments.

"This banking breakthrough marks a significant leap forward in how we pay and receive money from each other," said David Lindberg, executive general manager cards, payments and retail strategy Commonwealth Bank Australia. "Commbank Kaching brings speed, convenience and safety to our mobile phones."

Outside of NFC and P2P payments, the Commonwealth Bank Kaching app enables access to all basic banking transactions including account balance check. The bank says that 99 per cent of Netbank's current features are available through the app. Users can also top up credit and debit cards linked to their account and pay bills through the BPAY service.

CommBank says it will not charge its customers for the Kaching app, as it's "another logical step for customer satisfaction and service." Instead, it will attempt to use the Kaching app as leverage in an attempt to gain new customers. However, it will charge a yet to be announced fee for the compatible iCarte NFC-enabled case.