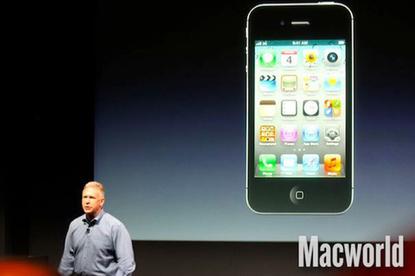 Apple's new CEO Tim Cook and other company executives today introduced the new iPhone 4S, an upgrade to the existing iPhone 4 that features the same faster dual-core processor now used in the iPad 2.

"There wasn't a single surprise in the whole lot, but the entire package is really sweet," said Ezra Gottheil, an analyst with Technology Business Research, in an interview after the 100-minute presentation.

"This is a win for Apple, no doubt," Gottheil said.

Cook kicked off iPhone 4S launch, taking the spot that former CEO Steve Jobs has made famous, and like Jobs, introduced several top Apple officials to spell out details.

Jobs, who resigned in August because of ongoing health issues, did not appear at the event.

The smartphone will be available on October 14 in the US, Canada, Australia, the UK, France, Germany and Japan. It will become available in 24 more countries by October 28, and in 70 countries by the end of the year.

Apple is also retaining the last-generation 16GB iPhone 4, and pricing it at $99, a 50 per cent reduction. In addition, it will continue distributing the 8GB iPhone 3GS - the 2009 version - for free, a departure from its usual practice.

All prices -- including the free iPhone 3GS -- require a two-year commitment to a mobile carrier. AT&T, Sprint and Verizon will carry the new smartphone in the U.S.

On the outside, the iPhone 4S looks identical to 2010's iPhone 4, but it's "all new" on the inside, an Apple executive claimed, arguing that it was "the best iPhone yet."

Carolina Milanesi, an analyst with Gartner, agreed, saying that the iPhone 4S has enough new features to entice consumers to upgrade, even those who now own the iPhone 4.

"It's really about the whole ecosystem," said Milanesi. "And about the details, which Apple excels at."

But she expected that some will criticise Apple for not pushing the envelope with a bigger screen, by refreshing the exterior design of the smartphone or by naming the new device the iPhone 5.

"This will underline what kind of consumer you are," she argued. "If you're after the newest bling, and want the iPhone for its fashion statement, you may not appreciate the iPhone 4S. It will come down to what you're looking for in the device."

Users more concerned about function than form will rush to the new model, she predicted.

Initially, the iPhone 4S will be available in the Australia, Canada, France, Germany, Japan, the U.S. and the U.K., with 22 more countries following two weeks later. "It's our fastest roll-out ever," said Cook, confirming what some analysts anticipated.

Philip Schiller, who leads Apple's marketing, promised that the new iPhone 4S will be faster -- up to seven times faster in rendering graphics -- thanks to the A5 system-on-a-chip (SoC) embedded in the device. Apple first used the A5 in the iPad 2 that it launched in March.

Like the A4 chip used in the iPhone 4, the A5 is based on an ARM Cortex design ; the latter, however is a dual-core processor built on the Cortex A9 that runs at 1Ghz.

Calling it Apple's first "world phone," Schiller said that the new model will support both CDMA- and GSM-based networks, the two most popular standards used by mobile carriers, eliminating the need to stock different phones for, say, AT&T and Verizon customers in the U.S.

A pair of antennas in the iPhone 4S, as well as supporting circuitry and chipsets, allow the single model to connect to both types of networks, said Schiller.

"Our engineering system has worked really hard at advancing the state of the art," said Schiller. "[The iPhone 4S] can now intelligently switch between the two antennas between transmit and receive."

As expected, the new iPhone sports a higher-resolution camera with an 8-megapixel sensor, a 60% improvement over the 5-megapixel camera in the iPhone 4. For shooting video, the camera now includes stabilization technology to produce less jitter when hand-held and will shoot 1080p video.

Also as predicted, Apple did not roll out a smartphone designed specifically for the faster LTE, often called "4G," networks.

"I think it would have been a mistake" for Apple to brave the LTE waters, said Milanesi, since that faster standard has not yet been widely deployed.

Apple's decision to not make a move on LTE, or other features found in Android smartphones, such as a larger screen, show that the company is comfortable with its current strategy, she added.

Among her highlights for the iPhone 4S was Apple's new "Siri" voice-controlled assistant, which will work only on the newest model.

During today's event, Apple's head of iOS development, Scott Forstall, demonstrated Siri. Later, Apple said that a beta of the voice-controlled agent will be available when the iPhone 4S appears.

Siri listens to natural-language instructions, and acts accordingly, letting users dictate email and text messages, set reminders, get directions, search the Web and more by simply talking to their iPhone.

In 2010, Apple acquired Siri, a maker of a personal assistant app for the iPhone, for a reported $200 million. Previously, reports surfaced that Apple combined the technology from Siri with that of Nuance, the company best known for its Dragon Dictate line of voice recognition software, but Apple did not mention the latter today.

Siri works with the iPhone's built-in apps, said Apple, but cannot do everything for users. It will debut in versions able to comprehend English, French and German, with more languages to follow, promised Schiller.

Apple also provided more information on iOS 5 today, saying that the mobile operating system upgrade -- which will power the iPhone 4S and be available to owners of iPhone 3GS and iPhone 4 smartphones, as well as all iPads and the last two generations of the iPod Touch -- will debut Oct. 12. Computerworld last week projected that release date based on past Apple practice .

The new iCloud synchronization and backup service will also launch on Oct. 12, said Eddy Cue, Apple's senior vice president of Internet software and services. The iTunes Match service, which Apple previewed last June at its annual developer conference, will debut in the U.S. at the end of October, and be priced at $24.99 yearly.

iTunes Match will scan a customer's iTunes collection, match those tunes that were not bought through Apple's store against the 18 million tracks in Apple's library, then make the matches available for instant downloading to a maximum 10 devices.

The complete package -- new hardware, iOS 5, Siri, iCloud -- is what most consumers will use to judge whether they'll buy an iPhone 4S, concluded Gottheil.

"Apple's job has always been to get rid of the things that are problems, and reduce the impediments to buying," Gottheil said. "For me, that shows in the integration of all the components, from the phone to iOS 5 to Siri."

Interest in the iPhone 4 briefly brought Apple's website offline, but the site quickly came back up.