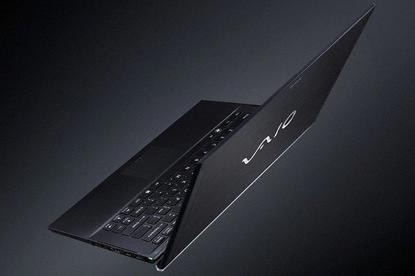 The new Sony VAIO Z is perhaps the ultimate corporate tool. It's impossibly thin and light, yet it packs a Second Generation Core i7 CPU, 8GB of DDR3 SDRAM and dual 256GB SSDs in a RAID 0 configuration. Boot up time is around 15 seconds and running time on batteries can be as long as 13 hours with the optional battery slice.

We had a chance to hold the Z Series in our hands and it feels as light as it looks — even with the optional second Sheet Battery attached. It's also really strong. There is barely any bend in the chassis and lid. The screen is super-thin, but it's also of high quality and we reckon it has great contrast and brightness for an ultralight. This is something we've come to expect from Sony. The usability is also good for such a small laptop; it has a comfortable, backlit keyboard and a smooth and responsive touchpad.

There is a vent at the side of the VAIO Z, as well as two fans underneath it. Sony has also interspersed vents throughout the top of the chassis to overcome problems should the fans at the bottom ever be covered up. There are little gaps along the sides and throughout the keyboard that allow the thin chassis to breathe from the top. This means you won't want to accidentally spill any liquids on it. The Sheet Battery actually covers up the two fans at the bottom, but there is a track built into it that still allows air to enter.

The VAIO Z series has a Second Generation Intel Core i7 CPU — it's the i7-2620M model with a 2.7GHz clock speed, although that can be boosted to 3.4GHz under full load through Intel's Turbo Boost tech. As for graphics performance, the Z Series can make use of integrated Sandy Bridge graphics (the Intel HD 3000 chipset), but there is also a Lightpeak-enabled Power Media Dock that houses a 1GB Radeon 6650M card. This module also houses the optical drive (a Blu-ray burner) and docking options for connecting extra screens (with the dock, the laptop can drive up to four screens at once) as well as USB 3.0 and Gigabit Ethernet. There are no extra storage options for it; you'll have to make do with external USB drives. Likewise, if you want a Blu-ray burner, you'll have to plug in an external one.

This dock is standard with the VAIO Z (VPCZ217G GX), which costs $4000. It's a hefty investment for a laptop, and it's not one that many mere mortals will be able to make. It's a laptop that's designed specifically with corporate users in mind. It will be available to buy in Australia from late July.