NICTA on the hunt for NBN application developers

Research organisation has the testbed network to fasttrack NBN applications 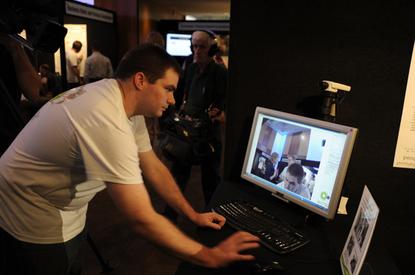 NICTA is looking for partners to get on board its Australian Centre for Broadband Innovation (ACBI) initiative.

Launched in December 2010, ACBI is a joint initative with the CSIRO, and is focused on fasttracking NBN applications in fields such as eHealth, education and new media, Government and Smart Infrastrucutre.

At its recent TechFest convention, NICTA demonstrated a new media application – a 'table' that takes advantage of rear projection technology to create a multi-touch touch screen.

With the ability to integrate with social media, play high definition video and numerous potential gaming applications the table would be equally applicable in the home, at museums to create interactive battlegrounds or attach video the exhibitions, or in retail as an alternate digital display technology.

This is just one application being tested at the ACBI, which has created a testbed network to simulate NBN performance.

Such applications could be as far as five years away, and require the cost of the technology to come down (currently it would retail at around $8000), and the NBN to handle the required bandwidth.

NICTA is putting the call out for more application developers and technology developers to make use of this testbed network, in line with its plans to fasttrack the kind of applications the market will expect once the NBN is rolled out.