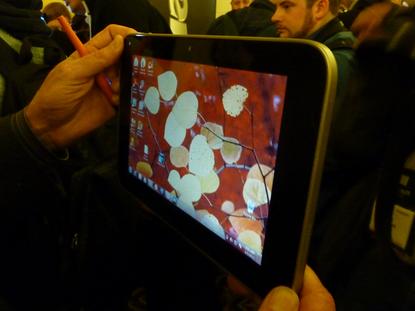 Chinese PC maker Lenovo plans on selling its LePad tablet worldwide in June, but will first launch the device in China at the end of March, a company spokesman said on Friday.

The LePad, Lenovo's first tablet computer, was unveiled in January during the Consumer Electronics Show in Las Vegas. The device is built with 10.1-inch screen that runs the Android 2.2 OS on a 1.2GHz Qualcomm Snapdragon processor. (See a video report on LePad's CES unveiling on YouTube.)

Lenovo said the device would be priced between $US399 and $449. But at the time, the company was still unsure whether it would sell the product outside of China.

While Lenovo now plans on selling the tablet overseas, company spokesman Jay Chen couldn't say which markets will be targeted.

Lenovo is the world's fourth largest PC maker, and dominates the Chinese market. Recently, it has began developing products in the emerging areas of tablets and smartphones. Last month, the company established a new business unit focused on developing such gadgets.

Tablet shipments are expected to reach 54.8 million units in 2011, up 181 per cent from the previous year, according to research firm Gartner. Other PC makers like Hewlett-Packard, Dell and Acer are also shifting their focus toward developing more tablets.