Hailing from Yorkshire, England, this dedicated IT man has worn many hats from field services manager to support manager to software development manager to chief executive officer. 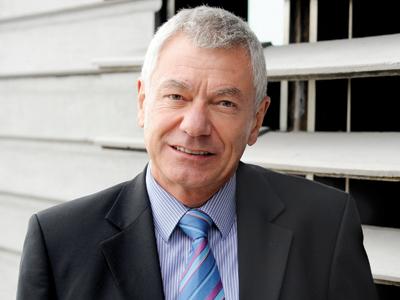 A day in the life of itX Group managing director, Laurie Sellers, is filled with crunching the numbers (he can colourfully chat about how to file an IPO prospectus and recite the steps involved in preparation for the Avnet takeover) to leading a team of 135 people at one of Australia’s most successful distribution companies.

And it’s all in a day’s work for Sellers, a true risk-taker, who uprooted his life in Yorkshire, England to start a new one in Sydney, Australia with his young family back in 1981. Over a 30-year career in IT, this humble, affable gentleman has rose up the ranks of the IT chain, successfully steering the ship of itX for 17 years (wearing the official MD hat for 12).

Did he always envision a career in IT? Definitely not, said Sellers, who has a penchant for classic motor car racing, boating and music (he has played the guitar since the age of 11 and now helps manage bands).

“I was more in sales, related to the motor industry. I was a car salesman for quite a few years in the UK, but I saw that it wasn’t going to offer me a long-term prospect. And I was looking for a way to get out of it. After doing a bit of research, I decided I wanted to be a computer programmer.”

Through a UK government-sponsored program he was able to retrain at the Control Data Institute in London. “But in talking to them I realised I didn’t want to be a computer programmer, I wanted to work with the hardware and work with the electronics.”

With true entrepreneurial gusto, he won the class prize and was the first student in the class to get a job. “Rather than wait for the institute to find something for me, I went out job hunting myself.” He got a job as a commissioning engineer for a company called Systems Reliability Limited in Luton, England.

But his days were numbered living and working in England. With a sea change in the cards, Sellers secured a job as a field services manager with the Australian arm of ICL, one of the largest British computer companies of the day.

“Within the first year, I was moved into the NSW support manager position instead, which probably fitted with my background and skills anyway.” “In 1984 they offered me the opportunity to come back to England as the project manager for a software development project, developing customer help desk software and diagnostic software for ICL’s mainframe computers, something I had experience doing in Australia.

"What we were doing caught the eye of the worldwide customer service manager in the UK. I ran that project for three years,” he said.

But Sellers was eager to get back Down Under. “By the end of three years, we were really conscious of all the reasons why we left England and we were keen to come back to Australia.”

Back in Terra Australis, he flourished in a sales-led role after ICL shifted him from the customer service marketing manager role.

“It played to my strengths and background because I’d been trained in sales and I had some advantage over a typical computer salesman in that I actually knew how they worked thanks to my engineering background.

“As a family we went from kind of struggling to having more money than we’d ever seen before as the commissions started to roll in – and I had to question myself why I hadn’t done it five years earlier.”

With his sales skills finely tuned, Sellers was ready to take the next step in his career when good friend and former manager, Rob Hack, came knocking. Hack asked Sellers to manage the eastern branch of GEC Alsthom.

“It was timely because I wasn’t entirely happy with my prospects at that time. I liked Rob a lot, thought he was a good manager, and was very happy to work for him again.

Within the first year an opportunity came up to take over the distribution business within GEC Alsthom, which was known as i.t.connXions,” he said. “ I felt that I could use my marketing skills to develop that business and it would be a good opportunity and a change for me to get away form the engineering side and more into the marketing and sales side.”

In October 2004, Sellers led the management team through a successful buy-out of itX – a move he calls one of the biggest achievements of his career. Over the following years, Sellers said his “biggest coup” at itX was in securing the Sun Microsystems relationship, which was no easy feat given Sun had an exclusive relationship with Mitsui.

“I was very jealous of this relationship between Sun and Mitsui. It became obvious to me how strong that relationship was by the difficulty I was having convincing Sun to give us an opportunity to come on-board as well to be a distributor.

“I felt I was making some headway but I wasn’t cracking it. And then all of a sudden we got a phone call one morning, from the guy we were dealing with at Sun, to explain that Mitsui had just announced they were closing their distribution business down in Australia.

“It was at the time when Japan was going through some very tough economic issues and they decided to pull the plug on a lot of their offshore businesses.”

Overnight, the business bulged in size. “It was like taking on a $100 million opportunity overnight. It was just a massive boost for the business.”

Clearly, Sellers is not afraid of a good challenge.

"I wasn’t afraid of approaching vendors and asking if we could distribute their product for them. You’ve really got to put a value proposition on the table that can really demonstrate to them that you’re going to add something to their channel and that you’ve got something to offer that’s to their advantage.”

And with Avnet close to formalising its $77.5 million acquisition of itX, Sellers said his next goal is to ensure the buy-out is successful and all employees – on both sides of the fence – are looked after.

“One of the philosophies that we’ve employed in our business – right from the very beginning – is that our business is based on the people. There are several things that I think make a successful distributor. You have to have the right people, the right vendors, and you’ve got to keep a close eye on inventory and credit,” he said.