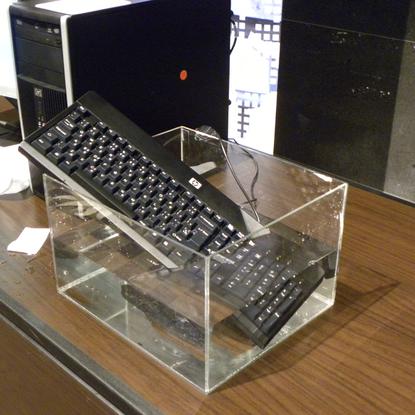 HP has released a range of new and refreshed commercial PCs, notebooks, point of sale and digital signage devices through the channel.

One of the highlights is HP’s $69 Washable Keyboard. The unit is designed to be cleaned with soaps and solvents. Its sealed structure means it can be safely placed under running water and will be protected against dust.

The HP Compaq 8000 Elite Series is made up of the three separate form factors aimed at business users. In designing the 8000f, HP took in environmental considerations in the type of plastic it is made out of.

The HP Z200 Workstation has a Energy Star 5.0 rating with HP WattSaver technology and a recommended retail price of $1999.

The TouchSmart 9100 multitouch enabled computer is targeted at businesses that want the flexibility of a touch interface. It is also designed for video conferencing and Windows 7 with an Intel Core 2 Duo processor and an optional Blu-ray player. RRPs start from $1999.

The EliteBook 2540p has a 12.1-inch LED screen and weighs 1.5kg. The vendor claims it meets military standards and has flexible performance options. HP’s EliteBook 2740p is a tablet device with DDR3 RAM while the 8440p, 8540p/w and 8740w models offer a variety of options for businesses, starting from an RRP of $3799.

The HP LD4200tm is a touch enabled 42-inch widescreen LCD with a Full HD 1920 x 1080 native resolution. Using infrared technology, two finger scrolling and multi-touch gestures are recognised. But keep in mind each one of these will set you back $3999.

Its non-touch sibling, the LD4200 Digital Signage Display, is also a 42-inch widescreen LCD screen with a 1920 x 1080 native resolution. It can be set for horizontal or vertical use and is aimed at hospitality, schools and public spaces. The RRP is $1999.

A new range of thin client devices being launched include the HP t5325, t5740 and t5745. Extra POS systems include the HP ap5000 all-in-one, which is built with a solid steel chassis, liquid and dust resistant touchscreen.