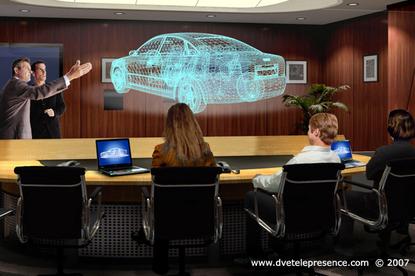 A telepresence system that uses a transparent screen can make meeting participants appear as if they are in the same room, without the need for 3-D glasses, vendor Digital Video Enterprises says.

The DVE Immersion Room doesn't use 3-D cameras or holograms, but its transparent polymer screen is invisible to viewers across a conference table, so remote participants appear suspended in space, said Steve McNelley, co-founder of DVE. The system projects their images onto the slanted, highly reflective screen from below, and anything behind that screen shows through so they appear to be in the same room. The company demonstrates it in a video on its Web site.

If you think that sounds like an amusement-park trick, you're not far off. DVE, based in Irvine, California, has been building custom display systems for concerts and amusement parks for years. With the Immersion Room, the company has packaged what it's learned along the way into a product, McNelley said. The Immersion Room can accommodate meetings with nine people at each end of a broadband connection. It has surround sound and a 120-inch diagonal display that can use video quality levels ranging from 720p at 60 frames per second (fps) to 1080p at 60fps. DVE or a system integrator will design and build the system in the customer's conference room.

"It literally is delivered from carpet to ceiling," McNelley said. "You give us the room, we go in and we design the whole experience." To conduct meetings, DVE recommends enterprises have at least 10M bps (bits per second) of bandwidth over an MPLS (Multiprotocol Label Switching) network tuned for video.

The system carries a list price of US$895,000 per room, about three times as expensive as a top-end, three-screen Cisco Telepresence Meeting system. (The price varies, depending on the particular setup.) But DVE aims to go beyond the experience provided by the Cisco platform, which shows meeting participants' images on large plasma displays with cameras mounted above.

"What's called telepresence today is really just videoconferencing," McNelley said. A key advantage of DVE's transparent screen is that the camera goes directly behind it, at what would be roughly the remote participant's eye level, he said. That way, users can look toward each others' eyes and be looking into the camera, which is hidden, he said. By contrast, telepresence systems that use solid plasma or LCD screens have cameras above the screen, so gazing into the camera requires looking up.

Users can simultaneously project onto the screen diagrams and digital mockups that appear to float in midair. The same screen can be used for showing movies and video presentations in the conference room, McNelley said. The system can also be adapted to show the type of stereoscopic 3-D used in feature films, with glasses, he said.

DVE already sells the Huddle 70, a smaller system that also uses digital projection but doesn't have a transparent screen. Those systems, which are priced from about $75,000, could be used in a companywide network with Immersion Room systems in a few key conference rooms, McNelley said. But the company doesn't expect to replace all the telepresence and videoconferencing systems that large enterprises already have installed. Its products are end points designed to work with the telepresence platforms of Cisco, Tandberg, Polycom and LifeSize. In fact, McNelley hopes DVE will be able to act as a system integrator of Cisco Telepresence, implementing it with the DVE end points.

A participant joining in from another vendor's telepresence system could appear suspended in space just like those in DVE rooms, as long as the other telepresence room was outfitted with black velour to make the background behind the participants disappear.

"There are some applications where eye contact is really important," said Wainhouse Research analyst Andrew Davis. Examples include telepsychiatry for soldiers in war zones and kiosks where consumers can discuss mortgages with a loan officer. Every telepresence vendor takes this seriously and has taken steps to maximize eye contact, he added. Another advantage to the DVE system is that it allows participants to stand up without their heads being cut off, he said.

But Davis believes the demand for DVE's system will be limited. Though DVE has built conference rooms for major financial companies and other clients, it doesn't have the market profile of a Cisco or Polycom. One other specialist company, Telepresence Tech, also claims its product provides a lifelike image with realistic eye contact. DVE is smart to work with other vendors' platforms, Davis said.

"For a really small company to sell a really expensive system, I think, is very difficult, particularly in today's environment," Davis said.