Inveneo, a U.S. technology nonprofit, set up the system as the country reeled from the deadly Jan. 12 earthquake 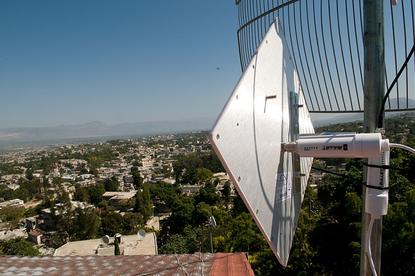 Inveneo's Wi-Fi network is still operating, helping several organizations aid the people of Haiti in the wake of the disastrous Jan. 12 earthquake. Following its experience in Haiti, the high-tech nonprofit may assemble a set of Wi-Fi equipment for fast deployment after the world's next major disaster.

The exploratory trip last month by San Francisco-based nonprofit Inveneo might have been fairly routine -- or at least as routine as things can be for a group that brings information technology to poor countries all over the world. Members of its team would go to yet another country and meet with nongovernmental organizations (NGOs) there to talk about their connectivity needs and discuss ways they could work together to aid the local population. Inveneo, founded about five years ago, had done similar work with partners in 23 countries, including Rwanda, Uganda, Afghanistan and Nepal.

But this time, the country was Haiti, and Inveneo's team was scheduled to arrive on Jan. 16. Four days before the trip, the country's strongest earthquake in 200 years flattened much of the capital city, Port-au-Prince. The disaster suddenly made Inveneo's help even more critical and dramatically changed its mission.

NetHope, a consortium of IT executives from more than 29 international aid organizations, asked Inveneo to help set up emergency communications across Port-au-Prince, where the power grid was out and phones barely worked. A partner, CHF International, had given NetHope access to a satellite VSAT (very small aperture terminal), but it would take additional wireless networks to extend that connectivity out to where all the various organizations were working.

Before the end of the week, Inveneo agreed to respond and got enough donated Wi-Fi equipment from vendors and distributors to link up 15 to 20 locations, said Mark Summer, Inveneo's chief innovation officer.

"By Monday evening, we had left San Francisco with all the gear we needed," Summer said. It was a little more than two pallets full of equipment.

A two-day journey via Chicago finally brought the Inveneo team to Haiti on Wednesday, Jan. 20, just over a week after the quake. Cellular systems and Internet service provider networks were still unreliable, and when they worked, they were overwhelmed with calls, Summer said. Meanwhile, it was more urgent than ever for international aid groups to coordinate their work and tell the world about the state of the country.

The VSAT had dramatically boosted the amount of available bandwidth, delivering 2.5M bps (bits per second) downstream, though only 512K bps upstream. By stringing together a series of Wi-Fi links around the VSAT, like spokes in a wheel, Inveneo set out to bring that bandwidth to far-flung facilities run by many different groups. In just a few days, Inveneo pieced the network together from off-the-shelf equipment, which included both typical wireless LAN access points and long-range gear designed for wireless ISPs, Summer said. Another piece of equipment Inveneo installed was a small, low-power Linux server that it uses as an Internet access gateway for data caching and bandwidth management.

Inveneo's work brought aid groups 10 to 20 times the Internet speed they had been getting, Summer said. Organizations including OxFam, Concern, CARE and Save The Children have benefited. That new international link via the VSAT was a boon to CARE, a U.S.-based relief organization, which was able to use it for VoIP (Voice over Internet Protocol) calls and video uploads, a CARE spokesman said last month.

Shortly after the Wi-Fi connections to the VSAT were completed, two Haitian ISPs, AccessHaiti and MultiLink, had restored their fiber networks and provided even faster connections. Inveneo's Wi-Fi system now feeds into the two synchronous ISP connections, one with 5M bps and the other with 4M bps. They reach the Internet via the neighboring Dominican Republic.

Some of the problems Inveneo faced in Haiti called for quick improvisation, Summer said. For example, the group needed tripods on which to mount the Wi-Fi radios it was taking to the country. Normally, an Inveneo team setting up a network would build the tripods out of locally available materials, such as pipes, Summer said. In this case, scrambling to gather materials before leaving its San Francisco headquarters, Inveneo went to a nearby music store and got a discount on about 30 speaker stands.

When first setting up its network in Haiti, where electricity was still out, Inveneo powered its access points using the generators at each site that was participating in the network. But because many sites are linked to the VSAT through other wireless LANs in the system, they can lose their Internet connection if someone down the line turns off a generator. Inveneo is now bringing in batteries for backup power at each site.

The solution for scoping out more locations that needed network connections was more high-tech, Summer said. Collaborating with Inveneo employees back in the relatively bandwidth-rich U.S., the team in Haiti used newly shot satellite imagery of the country that was quickly provided on Google Earth. The detailed overhead images helped the group determine exactly how and where the new radios should be set up, he said.

A month after the earthquake, Inveneo is pondering its ongoing role in Haiti. The group typically turns to local businesses to operate the IT infrastructure it brings in, because it believes for-profit enterprises have incentives and resources to maintain the technology and keep skilled employees.

"We don't want to be an ISP down there. We're not an ISP," Summer said.

But the Haiti experience led to at least one brand-new idea. Without turning Inveneo into an emergency response organization, Summer wants to consider collecting a set of equipment like what was brought to Haiti and setting it aside for similar emergencies.

"In retrospect, we were really lucky how fast we pulled this off and how well we were organized," Summer said. With a package of Wi-Fi equipment at the ready, "we could probably have been out there ... three or four days faster, and that would have been even better."