Samsung's new E-reader allows writing, but at a price 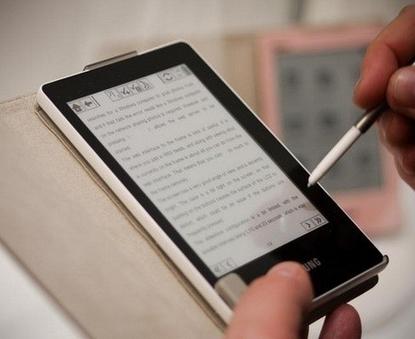 Samsung Electronics entered the e-reader fray on Wednesday, showing off two new devices with touchscreens you can take notes on with a stylus.

The Samsung E6 sports a 6-inch screen, while the E101 has a 10-inch screen. The handwriting capability is due to a built-in electromagnetic resonance (EMR) stylus pen with software options on how thick to draw or write on the screen.

The writing capability sets Samsung's e-reader apart from other models on the market but the function comes with a steep price tag. While the most expensive mainstream 6-inch e-readers cost between US$200 and $250, the Samsung E6 will be priced at $399. The larger E101 will cost $699. The two devices will be available early this year in the U.S.

Samsung also signed on with Google to offer e-books from Google's library of over 1 million volumes, the companies announced at the International Consumer Electronics Show (CES) in Las Vegas.

E-books can be downloaded wirelessly on the device via Wi-Fi 802.11b/g signals or sharing content with other devices with Bluetooth 2.0. The two new Samsung e-readers can run for 2-weeks after charging, the company said. They are also equipped for wireless.