Traces of elixir of life found on moon 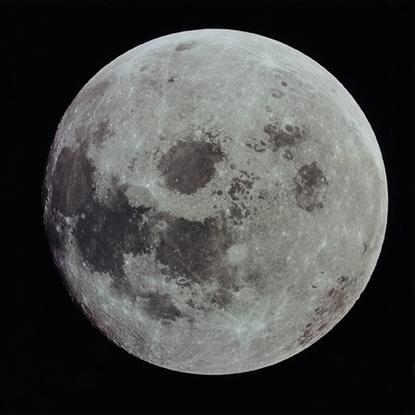 Scientists at the US space agency NASA (National Aeronautics and Space Administration) have discovered water molecules in the polar regions of the moon.

According to a NASA report, instruments aboard three separate spacecraft revealed water molecules in amounts that are greater than predicted, but still relatively small. "Hydroxyl, a molecule consisting of one oxygen atom and one hydrogen atom, was also found in the lunar soil," said the report.

The observations were made by NASA's Moon Mineralogy Mapper, or M3, which was carried into space on 22 October 2008, aboard the Indian Space Research Organization's Chandrayaan-1 spacecraft.

According to the report, M3's state-of-the-art spectrometer measured light reflecting off the moon's surface at infrared wavelengths, splitting the spectral colors of the lunar surface into small enough bits to reveal a new level of detail in surface composition. When the M3 science team analysed data from the instrument, they found the wavelengths of light being absorbed were consistent with the absorption patterns for water molecules and hydroxyl.

A holy grail for lunar scientists

"Water ice on the moon has been something of a holy grail for lunar scientists for a very long time," said Jim Green, director of the planetary science division at NASA headquarters in Washington. "This surprising finding has come about through the ingenuity, perseverance and international cooperation between NASA and the India Space Research Organization."

"When we say 'water on the moon', we are not talking about lakes, oceans or even puddles," said Carle Pieters, M3's principal investigator from Brown University. "Water on the moon means molecules of water and hydroxyl that interact with molecules of rock and dust specifically in the top millimeters of the moon's surface."